When the Bucknell on the Susquehanna students were on campus and not electro-shocking local streams, watching salmon spawn in the Pacific Northwest, or meeting with the spiritual leader of the Haudenosaunee Nation, we also had the responsibility to conduct another class, unique to each student. Incorporated in the program, one credit hour of the program is to be earned through an independent research project, advised by one of the three faculty. Projects ranged from feasibility analysis of nutrient trading in the Susquehanna watershed, to analysis of Marcellus Shale flowback water across the state (as reported to the DEP), and my own project on the local Limestone Run, more commonly known to Lewisburg residents as Bull Run. 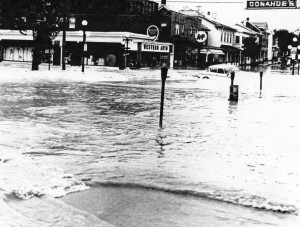 On June 22, 1972, floodwaters from Hurricane Agnes swelled Bull Run into a raging torrent described by the local paper as a "Tiny Monster". Mayor Baker's car was swept away in the deluge, appearing in this photograph at the intersection of Market and Sixth Street.

Most of the time Bull Run is an unimposing, and rather unattractive, stream that flows largely unnoticed through downtown Lewisburg. Unnoticed, that is, until the floodwaters rise over its rip-rap lined banks, and it again rises to the top of the community agenda. Record of the small stream flooding reaches back at least as far at 1895, with increasingly disastrous outcomes until it claimed three lives and caused several million dollars with of damage in 1972.  On June 22, 1972, Hurricane Agnes dumped anywhere from 12-16 inches of rain on the Susquehanna River Valley in less than 24 hours, causing massive flash flooding all over the area, followed about a day later by an unstoppable rise in the river that dealt a crippling blow to the entire State. While trying to evacuate the elderly Mr. and Mrs. Joseph Murphy of 107 S. Sixth Street, not far from where this photo was taken, town safety officer Gordon Hufnagle’s boat spun out of control in the current, capsizing  and dumping all three into the floodwaters. In the aftermath, that portion of the floodplain was purchased by the town and made into a park that now bears Hufnagle’s name.
.
Unfortunately, the circumstances that led to the disaster were well known and avoidable, as they had been debated for years, but without resolution. On St. Patrick’s Day 1936, the second highest flood to date on the Susquehanna River did thousands of dollars of damage to Lewisburg and the entire Susquehanna River Valley. Not insignificant was the flash flooding on Bull Run as land use changes and development altered its behavior and encroached on its floodplain. Following that flood, businesses reported significant flooding losses recurring at least every decade, if not more frequently. Because of this growing problem, local citizens and business owners attempted to do something about the recurring damage, but always were stopped short of any meaningful progress.
.
Immediately after the St. Patrick’s Day flood, efforts were put in motion to consult with the U.S. Army Corp of Engineers to do something about Bull Run. In 1937, the Corps presented a plan to divert the stream into Buffalo Creek, build a levy on the west end of the borough, and culvert the remaining drainage channel and cover it over all the way to the river. Though records do not indicate what the precise outcome of this proposal was, it was never acted on, most likely due to the expense and the drastic nature of the project. Again in 1958, a plan was presented to the Borough to address is the issue of Bull Run Flooding. It was prepared by the State Soil Conservation Agency, at the request of local business owners and civic organizations, but its $600,000 pricetag was too high to merit any significant attention. 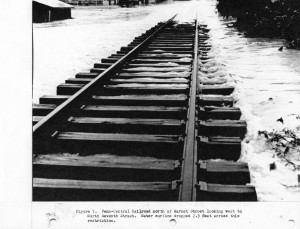 Damage assessment from Hurricane Agnes put the damage figures around $6,000,000, between flash flooding damage on Bull Run and slowly rising floodwaters from the Susquehanna rising to a 14.98 feet above floodstage. While impossible to determine the precise cost of Bull Run flooding alone, the three fatalities could clearly have been avoided. Allowing development of statutory floodplain represented poor planning, as well as the proposed solutions to the Bull Run issue referred to controlling and redirecting the stream, rather than acknowledging partial fault for developing land that should have been left to the waterway.
.
However, those issues in the past, the local government and even a citizen’s group known as the Bull Run Task Force banded together to make progress on the issue at last. Many improvements were made in a matter of months from the disaster, and subsequent actions have further aided the process, but there remains much to be done. Among the issues, a section of rental housing along Sixth Street is equally at risk for flooding as land that was reclaimed by the borough and razed shortly after Agnes, yet it remains occupied and active to this day.
.
My research in this area is far from exhaustive on the subject, particularly with the exhausting time demand of BotS travel, but it was an opportunity to dig deeper into a historical issue, and to document some elements of the disaster, along with community response, before they are lost to time. Already, numerous members of the committees and active citizens in the community are listed as deceased, but their memories of a disaster, and the response to it, can perhaps provide insight on how to avoid future calamities. 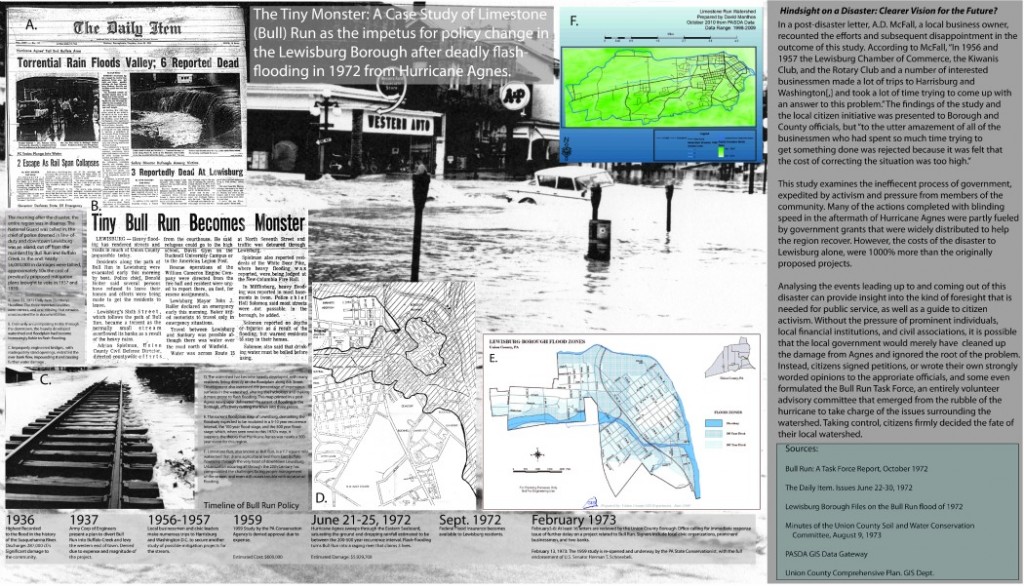 Attached is the poster presented at our end of semester symposium for BotS 2010.
Posted by David Manthos on February 1, 2011
Comments Off on The Tiny Monster: Limestone (Bull) Run in 1972