Speaking for the Salmon: Native American Perspectives in the Northwest

About the same time as the Civil Rights movement was taking the Deep South by storm, another social inequality in the Pacific Northwest was challenged and defeated by unlikely heroes. According to treaties signed in the 1800s between the State of Washington and the existing Native American tribes, the two parties were supposed to be entering joint-custody of the the natural resources such as salmon, shellfish, and hunting grounds. By signing the treaty, tribes such as the Squaxin, Nisqually, and Quiluete were granting the newcoming settlers space and permission to coexist alongside their own cultures, sharing in the bounty of natural resources. However, over the years that treaty became interpreted as a total surrender of rights to the State government, which was accordingly abused. While Rosa Parks refused to give up her seat on a Montgomery bus, Native American men were holding “fish-ins” in defiance of the government that was denying them access to a vital part of their identity and subsistence as a culture: the salmon. When the men were gassed, beaten, and taken to jail, the women took their places with the nets and the lines, protesting their right to practice their cultural heritage on lands that had agreed to share with those who were now their oppressors. These protests were even joined by the likes of Marlon Brando and Jane Fonda, lending their celebrity status to the weathered faces of the almost forgotten tribes.

However, on February 12, 1974, Judge George Boldt, an conservative judge from Montana with no precedent of Indian rights cases, whose reputation left the plaintiffs discouraged at his assignment to the case, handed down a decision that changed everything. The debate hinged around a clause in an 1850 treaty made with then Governor Issace Stevens, which guaranteed,

“The right of taking fish at usual and accustomed grounds and stations is further secured to said Indians in common with all citizens of the territory.” 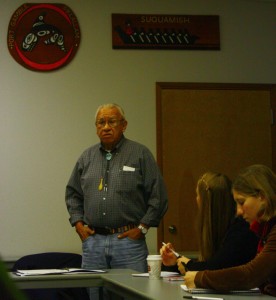 Billy Frank Jr., chairman of the NWIFC, addressing our group at the head offices in Olympia, Washington.

Until then, the state had interpreted the words, “in common with all citizens” as placing the Native American under the jurisdiction of the State, and thus subject to all their laws and regulations. The Native Americans interpreted the clause to secure their “right of taking fish”  and to mean common custody of the resource, allowing them to continue their centuries old traditions. To the surprise of all, Judge Boldt handed down a decision that not only granted the ancestral peoples of the Pacific Northwest with co-stewardship of the fisheries, but also with 50% of the salmon population to manage and maintain. A veteran of the old battles, Billy Frank Jr. still leads the Northwest Indian Fisheries Commission (NWIFC) and greeted the entire class heartily with back-slapping hug, speaking to us briefly before heading out to the airport in his tireless campaign for native rights and environmental responsibility. Frank was arrested over 50 times during the protests and “fish-ins,” at the time professing he didn’t have much of a place in the legal battle, but was more of a “getting arrested guy.” Now, at nearly 80, he travels even more than we do, visiting Denver and New Mexico just over the course of our stay in the Olympia area. He is a constant advocate for his people, for the species represented by the fisheries of the Pacific Northwest, and for the environment, as well as a respected elder and leader in the agencies that work on these issues.

To guide us over the course of our stay in the Puget Sound/Salish Sea region, Fran Wilshusen, also of the NWIFC, has arranged for a number of experiences to educate us on the region’s resources and concerns. Of all our guests, it is difficult to think of any greater welcome of the region than the robust handshake and earnest encouragement of a veteran of the wars that have brought the region to its present state, and who continues to lead it into the future. While many rights were restored by the Boldt Decision, the application of those rights, restoration efforts, and rights not addressed by that precedent continue to occupy the efforts of the local tribes, policy makers, and citizens. 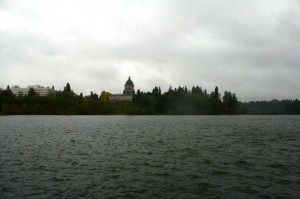 The State Capitol Building overlooking the lake, a popular recreational park. The waters, however, have been off-limits to boating and swimming to try to stop the transfer of mud snails into the Sound.

After leaving the NWIFC headquarters we met with Nathaniel Jones from the General Administration of the State of Washington to discuss an aesthetic but problematic issue on the grounds of the Capitol Building. Capitol Lake, a 200-acre reservoir designed and constructed in 1951 to invoke a feeling reminiscent of the Reflection Pool in Washington, D.C., and to eliminate the ghastly odors of tidal flat during a point in time when the river carried raw sewage. While the result is a rather attractive park with a walking trail, it impedes river estuary functions and has issues of contamination. Though salmon were not naturally able to swim past the falls at Tumwater, a State-run fishery has made the Deschutes River a part of the salmon fisheries again. Additionally, the lake’s capacity is significantly reduced by sediment accumulation, which will force decisive action sometime in the future, whether to undertake a costly restoration, or to dredge and continue to maintain the lake. So while the city is divided over restoration of the lake vs. continued maintenance,  the presence of an invasive species further complicates the issue. New Zealand Mud Snails are tiny mollusks with no natural predators in the Americas and are prolific asexual reproducers.It has taken freezing and increased salinity in the lake to produce near complete extermination of the invader, but their tiny size prevents absolutely certainty of success. Reconnecting the lake to the Sound has numerous implications, including potentially introducing the snails to the Sound, and the outcome of the decisions remain to be seen. 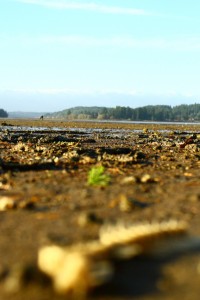 A fishbone in the foreground on the tidal flats, with John digging for clams in the background.

The salmon are an easily iconic cultural image, with their annual migration up rivers and streams among the more spectacular events in nature. However, shellfish buried in the mud are not nearly so awe-inspiring. Their value to the Native Americans, however, exceeds the value of the salmon run, meaning their preservation and health is of paramount importance. As filter feeders in the estuaries, they are the most sensitive to issues of water quality. John Konovsky of Squaxin Island Natural Resources guided our activities around Oakland Bay and shellfish production southern Puget Sound, himself a native waterman. Beginning at low-tide on the mudflats of Oakland Bay, we saw first-hand where watermen dig for clams. Then moving on to a commercial barge system operated by locally headquartered Taylor Seafood, we saw their nursery for raising young shellfish prior to being seeded in artificial beds. Lunch, ironically, consisted of the local harvest, at Xinh’s Clam House. A nationally known chef now, she began her cooking career in the mess halls of the US Army in Vietnam. She came to America the wife of a GI, and after learning to shuck oysters for Taylor Seafood, her talent eventually became renown.  Visited by Julia Child, and perhaps more contemporarily, Mike Rowe of the TV Show “Dirty Jobs,” she is quite the local celebrity, with a wall of photos from other famous guests and awards. 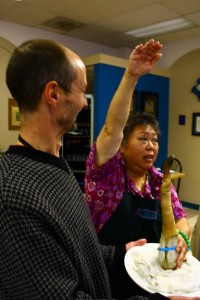 John Konovsky and Xinh! One thing though, she didn't tell us it was still alive until it squirted John.

One particular clam that Xinh prepared is worthy of note, and quite unforgettable. The geoduck (pronounced “gooey-duck”) is the largest member of the bivalve family, but it may not appear very appetizing. The geoduck is known for its snorkel, a fleshy appendage that can grow as much as 3 feet long. The snorkel is the edible portion of the clam, and does not retract into the shell, so accordingly they are buried about 3-4 feet deep in the mud and the sand of low tide. While an extremely valuable shellfish, especially in the Asian seafood market, their harvest is very disruptive to the bed. Each clam has to be dug out extensively with either hand tools or hydraulic equipment, and is generally considered a significant part of local culture. At John’s request, Xinh brought out this live geoduck for us to see. To our surprise and appreciation, lunch was paid for by Taylor Seafood, as a gesture of their interest in giving back to the community.

Our travels around the lands managed by the Squaxin Island Tribe included visiting the site of the Goldsborough Dam which has been removed and restored to allow salmon to spawn in its waters again. It was apparently working, as there were 40-50 pound fish torpedoing their way up the swift waters. Later, at Kennedy Creek, the smell of the decomposing fish signaled the evidence of a salmon run in clearly in progress. Our local guides chatted among themselves about the smell of the salmon,  integral to their culture and as familiar to their calendar as turkey and rutabaga on Thanksgiving Day are to me. It is a bit shocking at first to see the carcasses lining the banks, especially to those in our group who were unfamiliar with the fatal end of the spawning run for salmon, but this is their life. Standing on the paths that take you as close to the banks as is safe for the fish, I was amazed to watch fish bigger around than my leg struggling up streams with only a few inches of waters. Seagulls, gathered to dine on the spent fish,  even take a few pecks at a few that are still living. Unfamiliar to those of us from the East Coast, this run of fish is a fascinating thing to watch, and I understand how the Native peoples attributed so many stories and uses for the salmon.

Some of those stories were documented at the Squaxin Island Museum, where we concluded our second day in the Olympia area. By now, the days are actually closing in on our departure, and it is amazing how quickly the time has gone. It seems more like a few years ago that we arrived in San Francisco, not a mere 9 days. Just two more days and a day of flying to return to the Susquehanna.

Posted by David Manthos on December 1, 2010
Comments Off on Speaking for the Salmon: Native American Perspectives in the Northwest