San Francisco and Other Watersheds…

The Golden Gate Bridge from the shore of Bay, near Crissy Field. And of course, a dog managed to get in the picture.

San Francisco! To be more precise, the San Francisco Bay. On Thursday, November 11, BotS took two very packed Suburbans across the Bay Bridge and into the city. First on our agenda was to visit with Dr. John Callaway (Environmental Science, University of San Francisco) at Chrissy Field, a restoration project within sight of the iconic Golden Gate Bridge and Alcatraz Island. Originally a salt marsh rich in biodiversity, the site has seen a wide range of uses in the past century, but only now is it being restored to its natural condition.

Western humans seem to have always taken a dim view of marshes. Because they are too soft to build anything on, too wet to grow anything in, and they get in the way of our waterfront, they frequently become dumps for debris or get filled in to make way for new development. Following the devastating 1906 earthquake, the city had plenty of debris to dump into the marsh, regardless of whether it was toxic or detrimental to the environment. In 1912, the job was done, completely filled in to prepare for the Panama-Pacific Exposition of 1915. Six years after the fair, the U.S. Army opened an airfield, which remained a first line airbase until 1936. Decades later in 1994, the U.S. Army transferred the historic Presidio of San Francisco, which includes Crissy Field, to the National Park service in order to establish the Golden Gate National Recreation Area. In 1998, restoration efforts began in earnest to transform the legacy of nearly a century of detrimental landuse practices into something beautiful and natural.

Today, a first-rate bike path provides residents and visitors alike with access to the largest urban national park in the world. 20 million visitors a year pass by the 20-acre restored tidal marsh, use the 28-acre grass airfield for daily recreation, and of course, walk their dogs along the Promenade. It seemed every species of canine known to man walked by as Dr. Callaway described the extensive challenges of restoring the tidal marsh. A particularly interesting aspect of the restoration process is that a large portion of the funding came from private sources, not government grants. Private donations to the Golden Gate National Park Association as of December 2000 had totaled $31.5 million dollars, and of the approximately 2,400 donations from private sources, over 90 percent were $100 dollars or less. While it certainly takes large sums from concerned citizens and philanthropic funds to get projects like this moving, the individual donor of both time and money can have a phenomenal impact. 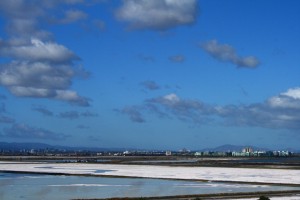 The southern end of the San Francisco Bay, with salt ponds currently in the process of being returned to tidal flats. This low lying end of the bay is one of the regions most susceptible to impacts from sea level rise.

The rest of the day included viewing salt ponds in the South Bay area, discussing restoration challenges and development issues in light of sea-level rise from climate change with Ellen Sampson from the San Francisco Bay Conservation and Development Commission (BCDC). Later gathering at the Dumbarton Bridge with USGS Geologist/Oceanographer Bruce Jaffe, we learned more about the intricate interactions of tidal actions, sea level rise, and the shoreline mudflats. With high-tide rising at his feet, Dr. Jaffe elaborated on years of bathymetric surveys in the bay, and the impacts of hydraulic mining for gold over a century ago.

Friday morning we said farewell to the Bay area, and headed eastward for the mountains. Ironically, had we stayed on Interstate 80 for another 3,000 miles, we would have arrived at the Susquehanna River a few miles North of Lewisburg. But that aside, we advanced toward the Sierra Mountains, crossing the wide Central Valley in the process. It was in this region that gold was discovered in the mid-19th century, and from the highway we can still see the scars of entire hillsides washed away for a few ounces of gold per ton. 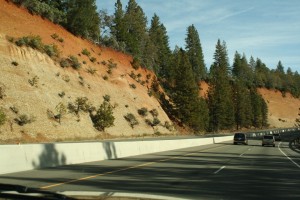 Roadcuts expose the iron-rich gravels deposited by ancient rivers that were once mined for gold. The hillsides throughout the region bear the scars like this from years of hydraulic mining the latter half of the 19th century.

Climbing higher into the mountains we start to see real evidence of our change in elevation: snow. Reaching Donner Pass at 7,227 feet above sea level, the ground is white, completely covered in several beautiful inches of pure snow. Several hundred feet lower on the California/Nevada border, we stopped for lunch and discussion at Lake Tahoe. With a relatively small watershed and output, the lake is mostly concerned with maintaining water quality with the increase of tourist and vacation residences. However, tomorrow we plan to visit a watershed system much more complex and hotly contested.

Evergreen forest and weathered granite boulders in the high altitudes of the Sierras. Unfortunately, this picture was also the set-up for a geology pun I should have seen coming.

The rest of the day was spent traveling down out of the mountains toward Reno, Nevada, and the Truckee River Basin. Along the way, we saw evidence of glacial outburst flooding and a thick outcrop of fine sediments from when the region was once covered by a glacial lake during the Pliestocene era. I managed to find a block that seems to have a stick embedded in it, which Dr. Kochel estimates to be from around 10,000-17,000 years ago. Besides worrying about it crumbling to dust before I could study it, I was a bit concerned about what the now infamous Transportation Security Agency (TSA) would think if they discovered this block of fine, powdery material in my luggage. “Glacial Lake Lahontan? Liminal sediments? The Pliestocene? Suuurrrrre buddy…”

Posted by David Manthos on December 1, 2010
Comments Off on San Francisco and Other Watersheds…