These next few days we are based in Olympia, Washington, a nice relief from traveling constantly.

This morning started out with an introduction to the Northwest Indian Fisheries Commission courtesy of Professor Wilshusen’s sister.  When we arrived at the Fisheries we were introduced to Billy Frank Jr., a leader in the movement for Native American rights. As he greeted us with enthusiastic hugs he thanked us for our concern and curiosity of fishing issues within the Northwest. Billy’s talk was not only informative but highly engaging because of his enthusiasm for the issue. This issue I talk of is based on the salmon and the quality of the Nisqually River and the Native Americans’ right to fish, a debate that stems back to the settlement of the West Coast. After years of fighting the state of Washington up to the Supreme Court it was decided in the mid 1970s that the Native Americans were allowed 50% of the total catch each year due to historic records. Part of their entitlement means they also have to help restore the river from the “poisons” that flow down the river. This means taking care of the watershed so that it can be “brought back to life.” I really liked how Billy Frank Jr. talked about the water and gave it life-like qualities, something I never do but as I think about it, the water is home to so many vital resources and even though I knew the quality wasn’t back giving it the life-like characteristics makes the issue seem even more urgent and important.

After our talk with Billy, we met Jim Peters and talked about how the NWIFC uses cooperative management within the Treaty Tribes in Washington to do what the court and their ancestors expect them to do. This includes restoration of rivers and removal of dams in some instances to allow for natural historical fish migration to occur up-rivers and streams again. One quote that stuck out to me that Mr. Peters said was “tribes (are) harvesters and stewards, not environmentalists.” What I think he meant was that the tribes within the Northwest do what they do for the historical recovery of nature, a nature that gave them and their ancestors so much, not just to campaign to do something. I thought this was interesting because it relates to the co-management that they do, working with the state through court agreements, like the Phase II and Timber, Fish and Wildlife Agreements, and also with the scientific world and industry themselves so that all benefit. 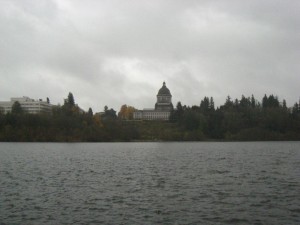 After lunch and a brief (but needed) nap, we met with a representative of the State Capitol to take a rainy walk around Capitol Lake. The lake was created due to a tide control dam and is now home to many creatures, including otters and sadly, highly invasive species. He explained the talk of removing the dam and what it would do to the quality of the water but also the public’s perspective on the removal of their boating lake, now closed off due to invasive species. What I found interesting throughout this talk was their management of the wildlife; in order to remove the invasive species they partially drained the lake, harming other species and not solving the problem. They also shoot Canada geese with paintballs so that they don’t stay on the south part of the lake where the people are in order to keep it clean. Both these seem like opposite management strategies (one harsher than the other) to the restoration of the natural river and habitats. Why talk about restoring habitat when you don’t let the existing habitat be as natural as it can be? 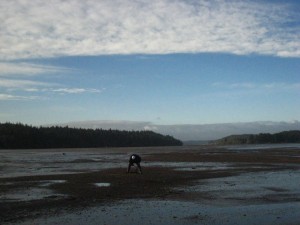 Day 10 was focused on the fisheries industry and started with a rather chilly trip to the Twin River Ranch where we got to see the mudflats where fisheries harvest and grow their products and how land in mudflats is territorially divided with stakes, which to me seems very primitive of the fishermen. It was sad, in my opinion, to see all the washed up remnants of fishermen and their tools on the higher ground of the flats because this is a place where one would expect the fishermen to respect the land to give them the best harvest.

I found the Taylor Shellfish Company’s floating hatchery to be interesting. I didn’t realize how complicated the shellfish industry is and how it differs from the East Coast. I found the process of importing the shellfish, acclimating them and then distributing them to be silimar to the process in the East Coast but slightly different because the hatching and growing doesn’t take place in one spot, the larger corporation seemed to have distributed the process on a larger regional scale.

Before we went off for a rather large lunch we went to one more spot, the site of a removed dam. It was great to see the site of the removed dam because it showed how the persistence of the Native Americans has successfully accomplished something so rewarding as the increased running of the salmon. 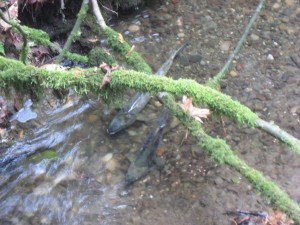 Two of the last salmon spawning, the larger fish to the left is the male. The process of spawning includes the female to flap her fin in order to create a nest where she lays her eggs then the male does the same. Both fish lay there slowly dying after the process is over.

After lunch we were able to see the salmon at the end of their run as they were spawning and then completing their natural life cycle. I never realized the importance of the fish dying and how their bodies would return nutrients to the water for the benefit of their young.

The final stop of the day was Squaxin Museum where we got to see how history and modern times have merged to produce the richness of the Squaxin Island tribe today. 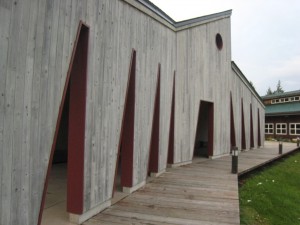 On this rather rainy 11th day we headed to the Nisqually Tribes Land Trust where they work on Resource Management and Watershed Restoration. This is the site of the removal of land barriers so that the Nisqually River could once again be part of a natural tidal marsh.

This is in part due to the Nisqually River Task Force. This task force was created to accomplish 100 tasks by purchasing land in trusts. This was a continuation of Billy Frank’s plan from the 1970’s where he wanted to “put the watershed back together.”

Throughout this trip, and this semester, I feel like we have been learning a lot of Humpty Dumpty Stories where something broke due to human impact and now we are putting it back together again. In the case with the Nisqually River, the watershed and marshlands were broken for farming practices but the consequences included harming the fish and ecosystem and now the Nisqually Tribe had to work to put everything back together again. During our rainy walk we were able to see where things were put back together and see how the area had improved within the past year due to the removal of the land barrier.

Our last day was spent at the Puget Sound Partnership. We met with Chris Townsend and talked about the overview of what the partnership does, how it compares to the East Coast and what its actions entail. I thought Chris was very informative, the Puget Sound Partnership seems to accomplish a lot for being so small. With their organization and Top Priority Action Plan, I feel like they are able to adequately protect the watershed from their biggest polluter right now, storm water pollution. It seems that they are working hard to find funds to update old areas of Tacoma in order to retrofit for better storm water collection and filtration.

After our brief meeting with Chris we went out and had a great boat tour of Commencement Bay where we could see how the civilian harbor patrol monitors the water for boat pollution, storm water pollution and safety of the wildlife. This may be very bold to say but I feel like the organizational skills of proactive groups in the West Coast is potentially better than the groups we have seen in the East Coast.

Posted by Joanna Freeman on December 1, 2010
Comments Off on Puget Sound