The Boldt Decision of 1974 secured many rights for the Native Americans, but decades of misuse and different priorities do not correct themselves overnight. At the Nisqually Tribal center, we met with tribal members and non-natives alike who have devoted their life to fighting for proper natural resource management and environmental rights. Some of the veterans of the salmon wars still work tirelessly with the local tribes and government, such as Georgiana Kautz, better known as “Porgy.” The results of their work is both exciting and dramatic, even though it may take years to fully realize success. 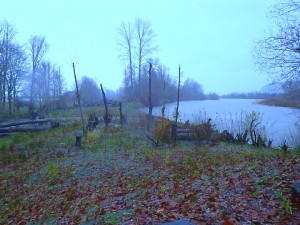 The end of the dike where over 700 acres of the Nisqually River Estuary has been restored.

One of these projects is the removal of a system of dikes that were built by farmers around the turn of the century. Going back to the idea I posed in an earlier post, western culture has placed very little value on marsh and estuary land, because of its lack of practical use for our interests. However, a century of depriving the delta of the daily tidal flooding is over, the culmination of years of work between local government, the tribes, and conservation group Ducks Unlimited. The project took years of work, and was no minor engineering feat either. The dikes have to be whittled away at until they have been reduced enough to remove in one massive effort. Were the impoundments to breach too soon, the ground would become saturated and far too unstable to finish the work. So over the course of a summer, contractors painstakingly broke down the dikes, and at the peak tide of the fall, they worked through the night to breach the last vestiges of the obstruction and let water onto the floodplain for the first time in years.

Despite the heavy rain, we were all able to walk out on a portion of the nature walk and see the now active estuary. These brackish wetlands are important because they provide a place for a wide range of wildlife to live, not the least of which, a hiding place for juvenile salmon to grow up safer from predators.To celebrate the restoration project, which alone increased the area of such estuaries in Puget Sound by 50%, was celebrated by traditional drums and songs, and significant media coverage documenting the success of the landmark project.

Nearby to the reserve, Frank’s Landing, named for the Billy Frank family, was the site of numerous run-in’s with law enforcement, and even now occasionally faces legal challenges over the smokeshop. Marginalized for years, the region’s Native American tribes have taken full advantage of the privileges their independently governed status provides. Casinos, discounted tobacco products, and their share of the salmon run, fund numerous programs and benefits to aid the members of the tribe. Schools, like the Wa He Lut Indian school adjacent to Frank’s Landing are funded from the casino and tobacco profits, and various tribes also simply give money to their clan members as a form of stipend. 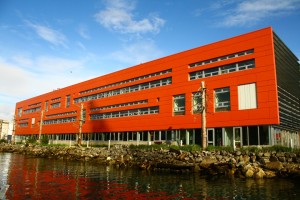 The Urban Waters Building in Tacoma, Washington, housing a number of agencies working with the Puget Sound Partnership. The dead trees, or snags, along the front of the building have been placed to encourage birds to roost there.

Fortunately, the final day of activities was much drier than Tuesday, especially since we spent a good deal of time on a boat. Meeting with the Puget Sound Partnership in the Urban Waters Building in Tacoma, we found an arrangement very reminiscent of the Chesapeake Bay Foundation (CBF). The first thing that attracted our attention was the “green” design of the building, utilizing rain barrels, a green roof, geothermal heat pumps, and other sustainable construction measures. However, one difference that was immediately recognizably different was the neighborhood. While the CBF was surrounded by trees and marshes, the Urban Waters Building is built on an artificial peninsula, directly adjacent to shipyards, warehouses, and a paper mill. A particular concern I noted was that the structure was only build to withstand “moderate” earthquake damage, as it was not considered an essential government building. This may prove to be problematic because there is a probable chance of a 7.1 magnitude earthquake hitting the region at some point in the not-too-distant future. The fault has not had any major events in 1,100 years, but recent tremors have suggested that may change. When it does, the loose sediment fill these buildings and factories are built on will liquefy in the shaking, causing devastating damage to buildings. Being green does not protect against earthquakes, but these are among the issues that face anyone planning construction.

A primary concern of the coalition is the impact of urban development on watersheds. During this trip we learned from the Squaxin Island tribe that as little 15% impervious surface (paved roads, roofs, storm drains) in a watershed is enough to make it a “lost cause” for restoration. When a watershed reached 5% impervious surface, even that caused significant impact to the health of that system. Obviously, inside a city the restoration and management practices are different than for preservation of more pristine regions. The collective agencies strive to prepare projects and initiatives that are “shovel-ready,” meaning they are more likely to be picked up by grants and donations as available. They also work proactively on regional policy, putting regulations in place such as banning the sale in the region of brake pads containing copper. The dust from the braking process subsequently winds up in the water, and it a serious toxin to salmon. 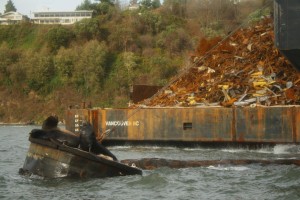 Across the Bay from Tacoma Steller's Sea Lions roost on a buoy. One of their natural predators, Orcas, have not been sighted in several years, probably contributing to the increase in local numbers.

To get us closer to the water, we toured around Commencement Bay in a small boat, exploring the wildlife and observing the human impacts on the shore and in the water. Ships coming and going from around the world complicate enforcement, our captain telling us of polluters and scrappers who threaten the water in the bay. Near massive barges of scrap iron, some sea lions were lounging on navigational buoys. Despite general concern about losing habitat and animal populations, sea lions are actually proving to be a overpopulated nuisances. Increased numbers of these fish-eating mammals have been blamed on reduced salmon runs, possibly indicating a major imbalance in the ecosystem.

Sadly, this brought our time on the West Coast to an end, and as much as I have enjoyed learning about the Susquehanna River, I regret having to leave the beauty of the West. Our nearly two weeks here have illuminated a number of distinct differences between eastern and western watershed issues, but also many similarities. Water quantity is as much or more an issue in the West than it is in the East, along with migratory fish a far more prevalent matter to the Native Americans of the Pacific Coast. Still, the challenges of coordinating watershed management and good landuse practices are complex and require a great deal of patience anywhere they are implemented. Now, back home in the Susquehanna watershed, the remainder of the semester will be spent documenting our experiences in the West and finalizing our independent research projects. Believe me, it has been a rewarding but  exhausting semester, and it actually feels good to stay in one place again. 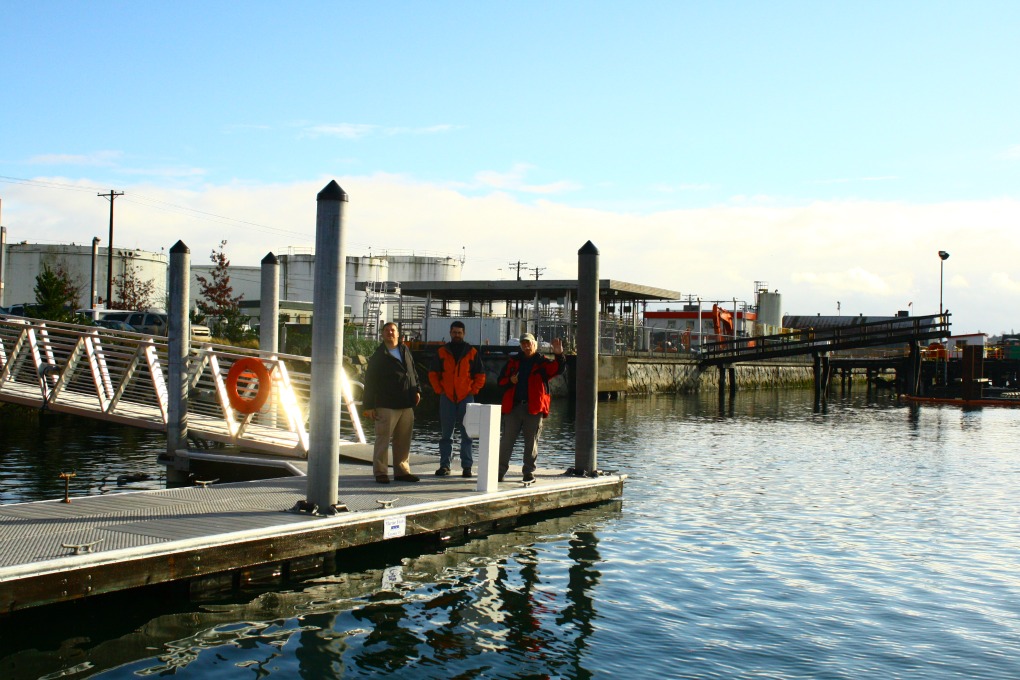 Our professors sending us off on a 26' boat to find our way back to the East Coast, up the Chesapeake, and finally the Susquehanna River back to Lewisburg. Or not. We flew home from Sea-Tac airport, this was merely a shot as we left them behind in Tacoma for a few hours while touring Commencement Bay.

Posted by David Manthos on December 1, 2010
Comments Off on Estuary Restoration and Urban Watersheds