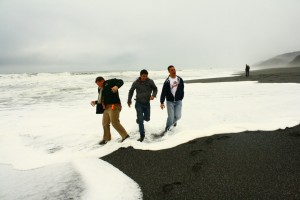 Watch out! The ocean can catch you by surprise if you aren't looking.

In my opinion, the coast of the Pacific Northwest is one of the most beautiful places I have ever seen. This is reflected in a piece that I wrote on a specific beach in Washington State, excerpted on a post a couple of weeks ago. I have visited this region several times in the last decade, but this trip up U.S. Route 101 up the California-Oregon coast is as thrilling and gorgeous now as it was the very first time. Unfortunately it is not possible to stop at every beautiful site along the way, but we did our best to at least get out and see some things along the way. One roadside beach proved to be a nice pulloff, but you have to watch the ocean or it may sneak up behind you and get your feet wet.

Highway 101, the thoroughfare up the West Coast, crosses many rivers as they make their final approaches to the sea. The Klamath River is one such river, a stream beleaguered by landuse disputes over what has been called by some, “an upside-down river.” The upper reaches of the river are relatively flat and highly developed for agriculture, while the lower end is wild and rugged, a recreational resource and spawning grounds for migratory fish. There has even been talk of diverting water from the river into the arid Central Valley, but the cost of these and other applications for the river’s high discharge are extremely controversial, and much like the Truckee, there have been barely contained wars over water rights. 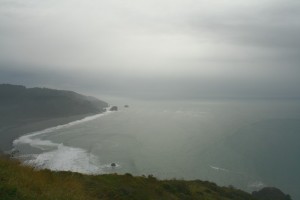 The Mouth of the Klamath River, the turbid fresh water clearly delineated against the greener water of the Pacific Ocean.

From an overlook high above the confluence of the river with ocean, the line between fresh and salt water is visible in the surf. The issues surrounding this and many of the other western states are not nearly so much about water quality as they are about water quantity. Not to say that the water is perfectly pure in the West, but the scarcity of this resource enhances the challenges involved in managing it. From the Central Valley to the Puget Sound, most of the people we have spoken with have some perspective on water appropriation. This only goes to show that while some environmental issues are world-wide, regional and geographic differences compound the intricate balance of resource management and environmental planning.

Further up the coast, and after another stop at rugged, fog-shrouded beach, the grey shoreline eventually grew darker and faded into night. The drivers began pacing out the journey according to bathroom stops and drive-thru espresso stands, eventually turning inland to 1-5. After winding along the Umpqa River, pushing through late into the evening on the interstate, and lodging for a night near Salem, Oregon, we still have the better part of another state left to go.

Portland, Oregon offered a nice break on Sunday morning, exemplifying numerous examples of “green” environmental planning. Buses, electric trolleys, and light rail service the area, along with generous bike lanes and park spaces, the city has been engineered toward making home and work as sustainable as possible. 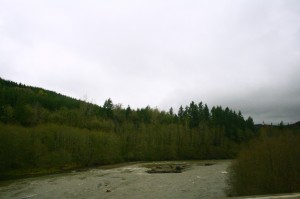 The North Fork Toutle River, a flooding threat to those that line its banks, because of the massive amounts of volcanic sediment and eroding soil that fill its channels.

Pressing north across the state we unfortunately ran into the only part of the trip to be cancelled due to weather, a visit to Mt. Saint Helens, Washington. We did get to see the Toutle River, a water body drastically affected by the violence of the eruption at 8:32 am, Sunday, May 18, 1980, but the mountain itself was completely fogged in. For a trip to the Pacific Northwest, only missing one site due to weather is a phenomenal achievement. The closest we got to the mountain was a sediment control structure constructed by the Army Corp of Engineers shortly after the eruption. A massive amount of sediment being washed off the slopes as both an impact of the eruption itself and the de-vegetation that occurred as a result of the blast. The 125-foot dam has trapped about 100,000,000 cubic yards of sediment so far, but is nearly full now, with another 200,000,000 expected to wash downstream. The Corp is actively engaging in new methods to retain the sediment, as excessive volumes of material clog channels and increase flooding downstream.

Finally, on Sunday afternoon, we arrived in Olympia, Washington, for the final phase of our trip. Thankfully, the rest of the trip will be based out of our hotel here in the state capitol, a welcome relief after hopping from one place to the next all of the previous week.

Posted by David Manthos on December 1, 2010
Comments Off on A Whole Lot of Driving (Part II)