A Whole Lot of Driving (Part I)

Since the plan for our West Coast expedition involves starting in San Francisco and ending in the Puget Sound Watershed, there obviously has to be a lot of traveling involved. Unfortunately, one of the Suburbans decided to die in the middle of nowhere on a two-lane highway in the desert. Fortunately it came back to life, but replacing it at Reno delayed the departure of our crossing of the third largest state in the U.S. But before we headed north, we explored some of the intricacies of water rights in the arid West.

Based on an archaic system, water appropriation is not based on need, or even proximity to the watershed, but on a first-come-first-serve basis. Whoever registers first with the State of California for the water rights of any given stream, they have the senior water rights. These rights allow the holder to use as much water as they desire, without equal partitioning to any of the others who are dependent on that water. The Truckee River has been the site of hotly contested water rights issues, chronicled in a book titled, “A Doubtful River.” 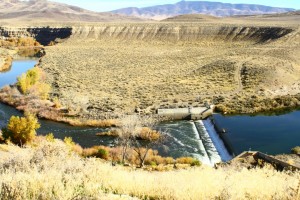 An impoundment on the Truckee River just before entering Pyramid Lake in the Nevada desert.

A farmer’s coalition in Fallon, Nevada, has the senior water rights to the Truckee, even though they are in and nearer to the Carson River. From the diminutive Derby Dam tucked next to a barren hillside, water is diverted out of the watershed to irrigate alfalfa, a very water-demanding crop. The Carson River could provide the farmers with as much water as they need, but they do not have the same priority to that water as they do in the Truckee, so they take all they need from a watershed miles away. The resulting shortage in the Truckee watershed impacts Pyramid Lake and the people with the very first claim to the land and the water: The Paiute Indians.

Unfortunately, I came down with a sudden case of food poisoning and was completely incapacitated during our visit with the Paiutes. Regrettably, I remember very little from the morning we spent with them. Fortunately I recovered without any need for medical attention and was able to eat a large Mexican dinner that evening. While state and federal regulations attempting to moderate a debate that at its most heated was an all-out “water war,” it seems that the only real solution to the issue is to revise the entire legal system, requiring equal distribution of water depending on need and proportionate to land holdings, but for now a tenuous balance of regulations and environmental minimums will have to do. 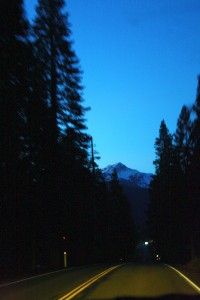 Approaching Lassen Peak, one of the beautiful things about going through the Cascades at twilight.

Once leaving Pyramid Lake, our convoy drove on into the evening across the central valley, with a brief stop in Red Bluff, California, for dinner. Unfortunately the logistics of our trip required that the next 143 were spent in the dark. Perhaps, though, it was for the best that we didn’t see some of the sheer cliff sides we were driving along. A few miles into California Route 36 a sign loomed ominously out of the dark: “Winding Road next 140 Miles.”

The sign wasn’t kidding, we were entering the Coastal Cascade Mountains. Four hours later, our eyes bleary with the strain of peering into the inky forest, we were still watching for mule deer that might run out in front of us and trying to tell what serpentine twist the road might take next. At one point, the rear wiper accidentally got switched on, causing a frightful shadow to sweep across the back glass and alarming one of the girls. Compounding the matter, neither of us up front knew what she was talking about and were innocently denying knowledge of the creepy shadow until it happened again. I spent the rest of the trip with the camera at the ready in the event the REAL Sasquatch strolled across the road.

Sadly, he never showed up, but if there is any place you would expect a mythic beast to make a last holdout against encroaching civilization, the forests of the California Coastal Cascades would be a great place to do it. We did see a porcupine waddle over the road during our last miles into Rio Del, but it was otherwise uneventful. The next day, just south of Rio Del, we visited the Giant Redwoods in the “Avenue of the Giants.” I usually take photos constantly, but these trees are so phenomenal it is simply impossible to really capture them, causing me to put away my camera and just stand in awe of these behemoths. 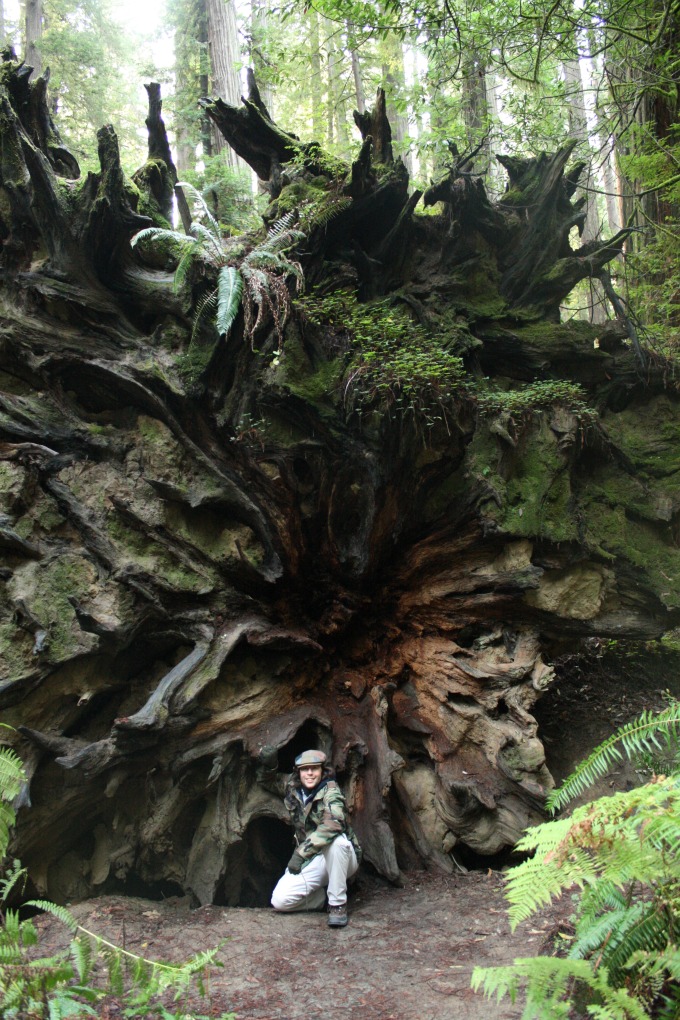 At the foot of a fallen giant in Humboldt State Forest

Posted by David Manthos on December 1, 2010
Comments Off on A Whole Lot of Driving (Part I)