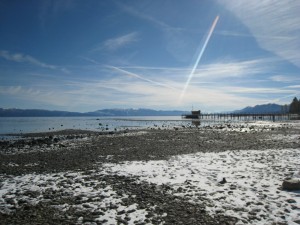 This morning started off with a long drive from Walnut Creek, CA to Tahoe City, CA. Driving into Tahoe was beautiful with the snow-capped mountains lying before us. We ate lunch at Lake Tahoe, and while we were freezing, we enjoyed the sites we saw before us. We were able to break up our driving and start to talk about the water issues in the closed Pyramid Lake/ Truckee River Basin that we had come to see, and Lake Tahoe was part of it. The water issues pertaining to Lake Tahoe are complicated because it lies between Nevada and California, both of whom want the water for themselves.

After lunch we continued our drive through and then past Reno so we could begin to explore the Truckee River. We made some quick stops at a dried lakebed so we could see the extent of glacial Lake Lahontan and how big it once was. We also stopped at Derby Dam, the main cause of the water allocation issues within this watershed. Derby Dam allows for most of the water that would normally go to Pyramid Lake to be bypassed off to Fallon, CA to be used for irrigation on their farms. This bypassing of the water has caused Pyramid Lake, a remnant of Lake Lahontan, to have massive water level drops of nearly 80 feet. We ended our driving tour by driving into Fallon and seeing the green fields of alfalfa and cows in the middle of a desert, not what you typically expect to see but it’s all because of the diversion at Derby Dam. 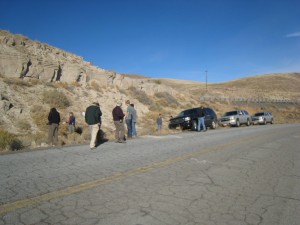 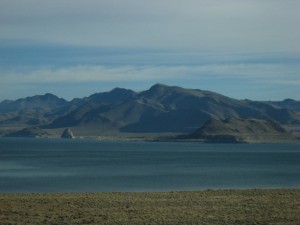 Friday morning we woke up and drove to see Pyramid Lake, barely making it on the way as one of our Suburbans decided to break down on the way. It was great to see the lake, and the pyramid of Tufa (a limestone deposit) that gives it its name. Pyramid Lake is very controversial because of the water diversion. If the water levels drops much further, the Anahoe Island, a National Wildlife Preserve for Pelicans, may be connected to the shore by a land bridge. This causes concern because animals like coyotes can then access the island and prey on the bird that live and nest close to the ground. Another issue regarding wildlife are fish, who have trouble accessing the lake because of the dam and have a hard time surviving in the lake with lower waters because it means a higher salt concentration, which means less revenue for the Paiute Indians who make a profit off of selling fishing licenses. 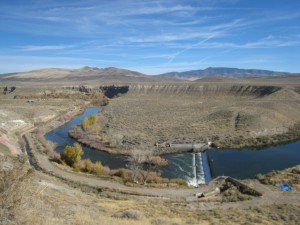 The Truckee River and a water bypass for agriculture use

After seeing Pyramid Lake we drove to the Paiute Indian Nation to meet with their hydrologist to get their perspective on the water supply issue. He explained to us how the Natives have had hard time getting rights to land and water, going back to the 1800s and wars between Mexico and Texas and how treaties for peace also meant that some natives were now subject to American laws and suddenly they lost all their rights. Fortunately Winter’s Doctrine allowed the Indians to fight for their rights and the decision gave all United States Native Americans their aboriginal rights, which would precede the Americans rights. This doctrine has helped the Paiute gain rights at Pyramid Lake which has now resulted in the future removal of Derby Dam, meaning fish habitats will be restored and the pelicans will be protected by water again.

After lunch and the return of one rental car for a new, working one, we were on our way for a long ride to northern California and Rio Dell.

Posted by Joanna Freeman on November 22, 2010
Comments Off on Truckee River Water Issues