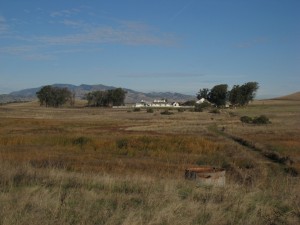 Suisun Marsh in the foreground and Rush Ranch in the background

Day three on the West Coast was spent in 2 places, Rush Ranch and Napa. We all loved the “late” departure from the hotel, 8 a.m., a luxury for BotS-ers. After piling into the 3 Suburbans we headed off to Rush Ranch so we could see Suisun Marsh. At the Ranch we met with Dr. Josh Collins from the San Francisco Estuary Institute. He talked us through the in and outs of a Tidal Marsh, including how it is formed, what lives there and how it is dynamically changing. It was a great experience because he was able to build on what we had learned about aquatic systems in Lewisburg with Professor McTammany. He explained to us how the different areas of the marsh, the 1st order, 2nd order etc. streams interplay with their network and the changing sea level. Sea level rise is bringing in more sediment to the marsh, and as Dr. Collins explained, the sediment is filtered out by the natural vegetation at the stream banks, building the height of the marsh near the stream and altering the dynamics of the marsh with the higher water. Before this morning, I had no idea that marshes were constantly changing. The tides can open or close streams within the marsh and plants can cover the stream and eventually, with enough root and vegetation cover, cut off part of a stream from the tides. 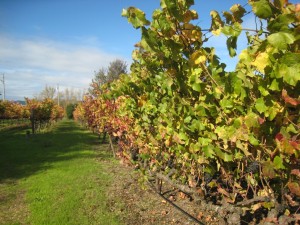 Grape vines at Saintsburg Vineyard, note the withered grapes at the bottom of each vine.

We spent the afternoon in Napa Valley learning about Climate Change and its affects on the grape vines. David Graves, a biologist from Saintsburg Vineyard, met with us and briefly talked to us about climate change’s huge impact on wine production. Throughout his talk he emphasized how a 1.5°C change in temperature, along with changing sun and rain intensities, has greatly impacted the grapes. This past summer he explained how cool the temperatures were consistently in the low 70s, but one day with a 60°F difference between the night time low of 50°F and day time high of 110°F essentially killed the grapes that were directly facing the sun because of the intense shock of temperature. I wouldn’t have begun to think about how climate change has already negatively affected such a widely consumed product because before this trip I wasn’t informed about the climatological effects on the grapes. It’s amazing to think of how much is going on, and how it almost seems like the big named vineyards are trying to hide this from their consumers so that a panic doesn’t arise within wine connoisseurs.

After a walk around Saintsburg Adam showed us the levee right on the Napa River, that they want to move back about 20 feet to help the health and habitat variety for fish spawning. The one problem is that a lot of vineyards have their grapes growing right up to the levees, and the movement of the levee would cost the growers 100s of bottles of wine a year due to the severe loss in vines.

This evening was capped by dinner and a talk with Brian Swimme, author of “The Universe Story.” I found this talk thrilling, and maybe it’s because he used me in his example of how fast galaxies move (I was galaxy #1), or maybe it’s how he was able to engage us all after a long day of traveling. Our talk lasted hours but didn’t feel that way at all. Our talk was about how science is a wisdom and how we can use that wisdom to be better people. Science isn’t a human construct he said, it’s fact that ”the Universe is a non-guided series of events that cannot be guided by a diety.” This struck me hard because I wasn’t prepared for a theologian to think like that. But it’s almost true because we as humans have caused what a lot of people are calling the modern mass-extinction of species due to our habitat-destroying ways. This may or may not be true to everyone but what I know is that something big is happening and Brian Swimme was able to reaffirm it without preaching it.

We started the next day at Crissy Field learning about tidal marsh lands. We met with John Callaway who led the class through a walking tour of the dymanics of the tidal marsh; unfortunately I missed the talk (note to self, eat). 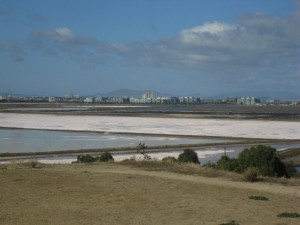 Salt ponds (the white is all salt) and San Francisco.

We then went to Bayfront Park to see Salt Ponds and talk with the BCDC about coastal management and planning for the Bay. This is where it hit me how vulnerable the San Francisco Bay is to sea level rise of not even 2 feet and how most people tend to ignore the problem. While standing on a hill acting as an overlook, we were able to see the large salt ponds, created to harvest salt from sea water way back when, that are now under plans for development of low income housing. During our talk someone mentioned how an area so vulnerable wasn’t being touched by the rich to live on, it was the lower income classes who were being forced to live in an area where FEMA and other government and insurance agencies would have to bail them out if anything happened and they lost everything. The people with the least get the short straw; essentially, they are the ones who will have to rebuild if they are flooded, and they are the ones who can’t afford to rebuild, which I don’t think is right but unfortunately that is how our society works. 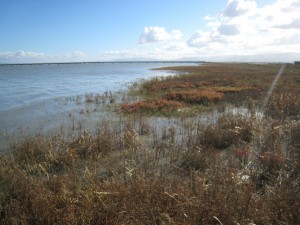 Afterwards we went to the Bay where we were able to see where the Hetch Hetchy Aqueduct crosses the San Francisco Bay and enters San Francisco. That was not why we were there; we met with Bruce Jaffee from the USGS and talked about the changing levels of salt and fresh water and how they mix in different areas and their effect on the South Bay’s Mud Flats. Afterwards, we were given a much-needed break and we were able to walk around San Francisco for a few hours.

Posted by Joanna Freeman on November 22, 2010
Comments Off on California Water Issues