As the damage to New Orleans from Katrina all but fades from the consciousness of American society, there is a strikingly similar disaster impending on the West Coast, merely awaiting its own “perfect storm.” A sequence of unfortunate but not altogether unlikely events could easily unleash devastation upon hundreds of thousands of residents and millions of dollars of infrastructure below sea level in the Sacramento and San Joaquin river delta.

The aging levee system between San Francisco and the state capital has prevented normal deposition of river and tidal sediment, while agriculture and development have drained the ground water and natural gas from the sinking soils, and all the while, people continue to build and further compress the subsiding land below sea level. This is one of the issues explored during the first two days of the BotS West Coast Expedition. 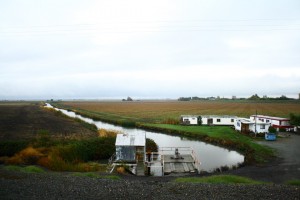 Looking down on the land below the levies. Through pumps and irrigation canals, the land continues to subside below deteriorating levies.

Sunday morning brought a wet and inauspicious start to our travels. Driving to downtown San Francisco in heavy rainfall, it is apparent that the storm water runoff system is aging and failing. Several portions of the highways are flooded and the city is barely visible in the rain and fog. Picking up Adam Parris (Bucknell ’99 and analyst for the NOAA) from Market Street in the downtown, we set out of the city for the Yolo Bypass Natural Area over an hour west of the city.

If you can help it at all, never step in wet bentonite clay. The expansive soil, a relic of volcanic deposition in the wetlands, clings by the pound to anything it touches, and comes off about as easily as wet cement. Unfortunately, at a field stop we all hopped out of the convoy and walked onto a recently plowed field of this material, and promptly regretted it. Several days later, the interior of the trucks in still scattered with crumbs and smears of the dried goo. Despite their annoying characteristics, these lands are used for agriculture, including citrus and pear orchards, but predominately rice, which thrives in the saturated ground.

Much like in Louisiana, a system of levies protects human development in areas that have sunk well below sea level, and the relief is strikingly disturbing as we drive along the top of these flood control structures. On the right, the water level in the river channels laps disconcertingly high on the levies, while rooftops and telephone poles on the left barely reach the level of the road, if at all. The road is rough and wavy, further cause for concern, as it is evidence of subsidence and/or soil expansion in the construction materials. Very few regulations exist to maintain the integrity of the levees, a conglomeration of federal and locally funded projects that are now showing their age. Add to this, the prospect of climate change and rising sea level altering the base level that the levies were constructed for, the stage is set for a perfect storm.

California does not receive the predictable annual assault from hurricanes like the eastern United States, but it is nonetheless subject to the occasional Pacific typhoon. In the event one such storm would strike the coast, the combined assault of river flooding from rainfall and the accompanying storm surge up the bay could breach the levies, and would be doubly catastrophic if even a medium earthquake (In California? Preposterous, I know!) would happen to hit the region simultaneously. While this scenario may come across at first as overly sensational, the prospect of a large coastal storm, potentially coupled with a seismic event, is not an impossible set of odds to consider.

After exploring the delta region, our convoy headed high into the Sierra Nevada Mountains, spending the night near the western entrance of Yosemite National Park. Our next destination the primary water source for the City of San Francisco. 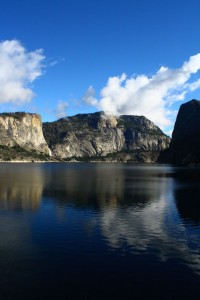 The snowmelt of the high Sierra mountains flowing into San Francisco's water supply.

High in the Sierra Nevada Mountains, on a massive granite batholith (a single massive block of one rock type), O’Shawnessy Dam traps the spring snowmelt racing down the Toulumne River, diverting much of it to San Francisco for electricity and drinking water. In a state filled with reservoirs to compensate for its abundant population and scarce rainfall, the dam would not be nearly as controversial if not for where it is located. The Toulumne River flows through the Hetch Hetchy Valley in Yosemite National Park, with a larger watershed than Merced River flowing by the foot of El Capitan. Due to the purity of the water flowing into the valley, San Francisco operates under one of five EPA-issued permits in the entire nation to supply public drinking water without filtering it first. 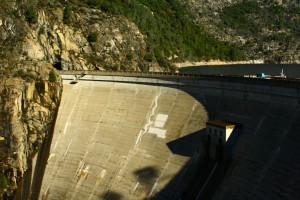 O'Shawnessy Dam at Hetch Hetchy in Yosemite. Though painted over now, the white pain conceals a crack painted on during the 1960's, accompanied by a quote from John Muir: "Set the River Free."

The winter snowmelt is trapped behind the dam in the Hetch Hetchy Valley may go one of two of two routes down out of the Sierras. Particularly during the spring melt, water is discharged downstream of the dam at high velocity into a sheer granite wall. This configuration ensures that the water being released to sustain downstream ecosystems is fully oxygenated. The second route is through miles of tunnels over land and through bedrock to the San Francisco Water supply. Not a single pump exists between Hetch Hetchy and its destination, a marvel of engineering that includes sufficient vertical drop though penstock tubes to power multiple hydro-electric generators on its way downhill. 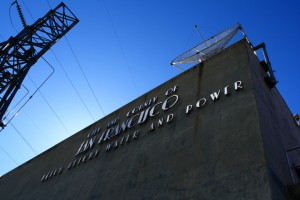 The Mocassin Creek Powerhouse, downstream from the reservoir after miles of tunnels and pipes.

After visiting the dam itself, we ventured down the valley to the Moccassin Creek powerhouse, to meet the water master for the entire Hetch Hetchy system, Bruce McGurk. Right next to the 1926 powerhouse, a beautiful but dilapidated stucco structure, the current powerhouse holds two 55 megawatt generators that derive power from the descending drinking water. The current powerhouse, except for the Art Deco lettering, is strictly utilitarian concrete and metal grating, driving Pelton wheels at 600 pounds per square inch of water pressure.

However, during heavy rains (which are not that frequent), one of the local watersheds may spill into the Mocassin Reservoir. In the event this occurs, all of the drinking water being stored in the reservoir is contaminated (relative to drinking water standards) and has to be flushed multiple times into other stream systems. One reason Mocassin Creek is deemed by the EPA to be contaminated is due to the after-affects of hydraulic gold mining in California from 1852 to 1884.

Returning to Sacramento for the evening, I presented to the rest of the class an overview of the affects of mining these deposits for gold. During these years, over 6,000 miles of canals and channels were dug to divert water to hoses and massive brass nozzles used to wash away entire hillsides containing gold-bearing gravel. Not only did the process use large amounts of mercury to enhance collection of the malleable yellow metal, but entire ecosystems and rivers were disrupted by the massive operations, and mining operations were finally outlawed in 1884 due to the floods and lost agricultural productivity.

Posted by David Manthos on November 15, 2010
Comments Off on Water, water everywhere…