Marshes, vineyards and the universe 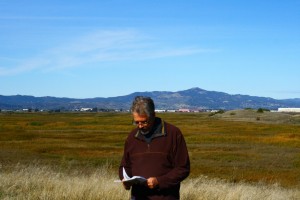 Dr. Collins explaining the intricacies of the the Suisun Marsh, with the varying colors in the background indicative of the different species of marsh plants that call this place home.

Mid-way between Sacramento/San Joaquin River Valley and the San Fransico Bay, the Suisun Marsh houses an intricate tidal ecosystem sensitive to extremely minute variations in biological and geomorphological conditions. Joining Dr. Josh Collins at Rush Ranch, our crew took a short trek into the marsh atop a small bedrock outcrop rising above the flat acres of pickleweed. From this vantage point underneath a flight path to a local airbase, Dr. Collins dove into fascinating detail of the tidal landscape spread out before us.

Unlike the continental scale tectonic processes we have been observing in the faults of California, tidal systems are governed by extremely minute processes that took Dr. Collins and others years of gathering data to fully understand. In less than two hours, however, BotS was illuminated on several fascinating details that have been discovered about the behavior of these sensitive ecosystems.

Over time, scientists noted that channels appeared and disappeared, seemingly without any cause. However, some of the channels simply became overgrown with vegetation and covered with organic matter, eventually forming subterranean channels in the marsh. Conversely, changes such as relative position to the tidal energy source and sea level rise can cause them to reappear. Additionally, in a region with topography measured in just inches instead of feet or meters, time (relative) to the tides can reshape tidal marsh channels. The tidal surge in one side of the marsh can put in effect the first law of geomorphology and plumbing: stuff flows downhill. Even though the marsh may be divided into different basins with elevational divides, an earlier high tide in one side of the marsh may overrun the high divides of the marsh, flooding into regions that haven’t been affected by tides yet. The resulting erosion and shift in topography completely reshapes the flats, carved out by nothing more than a difference in time.

Yet another feature mystified scientists for years, and it was even blamed for a little while on the U.S. Air Force. Separated from the tidal action, shallow lakes known as pannes pockmark the landscape, and were thought at first to be the bomb scars from WWII and Cold War target practice. However, carbon and sediment dating of most of them proved to be around 1,000 years old, meaning there must be a different explanation.

The cause turns out to be different rates of growth between species of pickleweed. Slower growing patches of this predominant marsh plant build up organic matter in the marsh slower than in other regions, forming a depression in the topography while the rest of the marsh builds up around it. Eventually, the depression becomes flooded by salt or brackish water deeper than pickleweed can survive in, killing off the vegetation and forming a bare patch in the marsh that becomes a unique part of the tidal ecosystem. While the explanation of the marsh’s features is extremely detailed and complex, it was an absolutely mind-blowing experience to learn how landforms can be shaped by forces as minute as the timing of the tides and varying rates of plant growth. 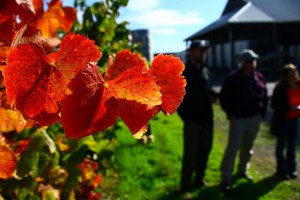 BotS in the Napa Valley, near grapevines that have been cultivated for centuries.

Even before our present interest in climate change, especially that which is caused by human impacts, another industry has been keeping detailed records of weather for one of mankind’s oldest and most prized crafts. East of the Susiun Marsh, we visited a vineyard to hear about the affects of climate change on Napa Valley’s booming wine industry. Climate change is a significant threat to the vineyards, which use vines cultivated from European stocks centuries old. If average temperatures continue to rise and precipitation patterns change, the entire industry could be forced to move out of the valley toward the ocean.

In the evening though, we had the opportunity to discuss a story bigger than wine or valleys, and even bigger than the climate of the entire planet. Brian Swimme, cosmologist and author of The Universe Story, joined us for dinner to discuss a new perspective on the history of space and time, and how it relates to the role of the human race. While impossible to condense an entire cosmology into a paragraph or two, Dr. Swimme has focused on reverence for the vastness of space and time. Relative to a universe expanding at exponential rates from an undefined center, humanity has a shockingly tiny place in the grand dance of the galaxies. 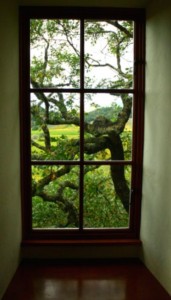 How do we look out our windows into the complexity of the Universe?

The human race has the unique perspective in the world that we are capable of comprehending the wonder of the world around us. As a race of people fascinated with telling stories, it is our responsibility to incorporate our scientific revelations with our sense of wonder at the marvels of existence. Swimme has taken our scientific understanding of the existence of our universe, from the Big Bang, through the cooling of gas clouds and condensation of planets, all the way to our current presence as a species, and he has told it as a story of profound significance for our species. I specifically noted in his book and in our conversation that it meshes very well with my personal religious beliefs, but he never identifies any specific religious affiliation. His explanation, however, is that the story of the universe is such a dynamic story on its own and applicable to so many world views, that he did not want to use elements of any other story to tell the core message. However, he fully encourages people of all world views to interpret the story and its meaning and place in their own lives. If one word could sum up both the Universe Story and the BotS West Coast trip so far, it would be: WOW!

Posted by David Manthos on November 15, 2010
Comments Off on Marshes, vineyards and the universe