Bucknell on the Susquehanna is no longer on the East Coast. On Saturday morning, BotS’s fifth Bucknell bus departed from campus, headed for Harrisburg International Airport. A full day of traveling later, at about 6 p.m. local time, our aircraft touched down in San Francisco under clear skies. For the next two weeks, we will explore comparisons and contrasts between western watersheds, ecology, geology, resource management issues, and more. 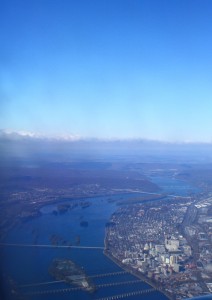 Saying farewell to the Susquehanna River for two weeks, the view from the window of our plane out of Harrisburg Airport.

It has not been easy to get here. The better part of our previous week was spent discussing and preparing for this trip and a year of planning before that on the part of the faculty. Many of the students have been anticipating this trip, not just because of the educational opportunity, but also because it will be their first time on the West Coast.  Also, a couple students are returning home to California and they are very happy to be back. Personally, I have been to most of the regions we will be visiting, but will be looking at them from a completely different perspective and going to places a tourist could never get to or think of going.

By the time we collected our baggage, picked up our convoy of three intimidating Chevy Suburbans*, and made it over to our hotel for the night, there was no longer any light in the sky. After a great meal of Mexican food, we spent the night sleeping right over the San Andreas Fault right as it heads out to sea near Pacifica, Calif. The ocean crashing right within view of my hotel window was too great an opportunity to resist, and before retiring for the night I walked out on the shore of the mighty Pacific. Ironically, the beach is very reminiscent of a piece of shore in northern Washington State, a beach that I wrote about for my nature writing assignment this past week. The following is an excerpt from that piece:

The sky is almost perpetually covered by a featureless blanket of grey clouds, which the sea restlessly reflects in a contorted collage of different shades. The coarse pebbles on the beach range from dark olivine to black, with a few odd bits of granite thrown in; the black rocks mostly comprised of wet grey stones. Out in the murky surf, dark spires of resistant rock rise out of the spray, mostly dull, but usually circled by seabirds and capped with a tenacious sprig of vegetation. In the backdrop, the scaly grey bark of the evergreen forests line the beach for as far as the eye can see, their largely limbless trunks soaring toward the sky then forming a dark green canopy. In between the ocean and the forest, however, lies a bone yard of dry timbers in a rude heap. They have been scoured barkless by the surf, bleached by salt water and weathered grey by the rain, then swept ashore and dropped at the border of the forest and the beach by mighty winter storms. Here, where the only starfish and anemones add any sparks of color, there is a dull but unavoidable sense of serenity.

One word succinctly describes this section of Pacific Ocean shore, and that word is “grey.” As far removed from the typical American beach as the rugged angles of the Cascade Mountains are dissimilar to the rolling folds of the Appalachians, Rialto Beach is a place of rugged and austere beauty. Part of the northernmost beach on the West Coast of the continental United States, this western shore of the Olympic Peninsula is constantly refrigerated by the arctic currents streaming down from Canada.

Meanwhile, thick, humid air from North America’s only temperate rainforest flows down from the mainland. The resulting atmospheric collision leaves this shore nearly constantly cloaked in fog and light, misty rain. In both of my visits to this part of the world, I have fallen in love with the headlands, tidepools, and rough beauty that defines this rugged slice of America’s Western Coast.

*Oddly enough, the choice of three large SUVs for an Environmental Studies field trip is fully justifiable. Eleven students, three faculty, and all of their gear for two weeks in climates ranging from the desert to the high Sierra Nevada Mountains, requires a lot of cargo space and high ground clearance. Unfortunately, a fleet of Prius hybrids does not fit this criteria.

Posted by David Manthos on November 9, 2010
Comments Off on Westward ho!