For the next two weeks, BotS will be traveling around the West Coast learning about watersheds and comparing them to the Susquehanna watershed. 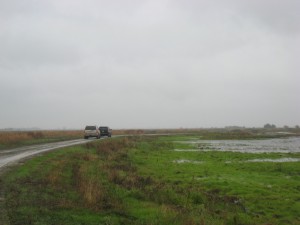 2/3 of our caravan driving through the Yolo Bypass

We started our trip in San Francisco where our hotel was located, literally, on the San Andreas Fault. It was relaxing to wake up and both see and hear the Pacific Ocean out our windows. On this rainy day we have scheduled a driving tour of the Sacramento River Delta, led by Bucknell Alum Adam Paris ’99. Adam has done some environmental restoration work in the San Francisco Bay Area and is well versed on the stops we have planned.

Our first stop of the day was the Yolo Bypass, built in the late 1800s to early 1900s. The exact date is up for debate in BotS. The bypass was built as a flood control. When the Sacramento River is flooding from the north, the bypass diverts water away from the river where it will sit in a wetland storage area, bounded by levees. We arrived at the Yolo Bypass in our caravan of three Chevy Suburban’s. Unfortunately only one is black and none have tinted windows. Due to the on-and-off rain, we were not able to walk around the bypass very much but were able to do the driving tour of the area.

The area is divided into permanent wetlands, seasonal wetlands and rice fields. As we found out the hard way, the soils act like clay on your shoes as they are very basaltic. So, we all spent a good 20 minutes trying to get our shoes clean before getting back into our cars. There now is mud everywhere. Throughout the drive, we noticed tons of birds, ranging from ducks to heron and egrets to hawks. This is a great habitat for bird migrations, except when flooded in the wet season, November to May. The reason this is such a long wet season is the Mediterranean climate that this area sits in. 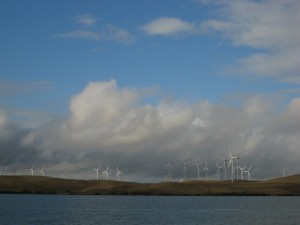 After seeing the Yolo bypass, it was time for lunch and we couldn’t resist stopping at an In N’ Out Burger joint. We are on the West Coast, after all.

After lunch we were off on a long driving tour of the rest of the Sacramento River delta. For as far as the eye could see there was nothing but fields and orchards. We drove around on the extensive levee system where we could see the extent of sea level on the fields and how subsidence has affected the area that has a long history of water extraction for agriculture. On one side of the levee would be a canal or river that would be at a higher level than the fields.

One stop was the Brannan State Park where we stood on the boat dock and talked about restoring some farmlands to wetlands, especially with impending sea water levels within the tidal delta caused by climate change. This tied in well with our final stop at the Big Break Regional Shore line where we saw the marshlands that are also affected by increased sea level rise and a side trip to a restoration project where farmers have sold some of their land into conservation easements to create wetlands where wetlands historically have been. 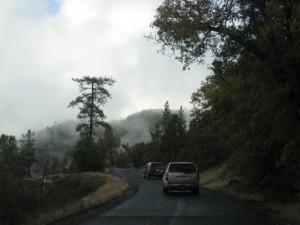 Monday started off 3,000 feet up in the Sierra Mountains near the entrance to Yosemite Park. We started the day on a scenic drive into the Park and headed to Hetch Hetchy Reservoir. Hetch Hetchy was one of the first reservoirs built in the early 1900s and very controversial. The reservoir was built to provide water to the San Francisco area after the 1906 fire. It was built in a river valley by damming off the river and was completed in two stages, ultimately creating an 85-foot deep lake. The water is very pure because the watershed is uninterrupted. This reservoir is the first of multiple reservoirs that essentially cut across the state to provide water to the Bay area. The water is piped in controlled fashion in the dry season, May to November, down stream to Moccasin, Calif., where it is used in a hydroelectric dam and then passed further down stream. In the wet season, November to May, the Hetch Hetchy Water Authority controls water so that the reservoir builds its supply from the few years of drought California has had, but also allows some spill over to keep the ecosystem productive down stream. 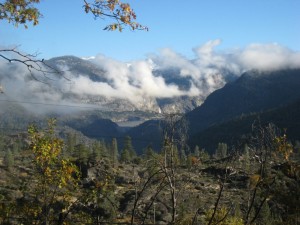 Hetch Hetchy as seen from a vista point 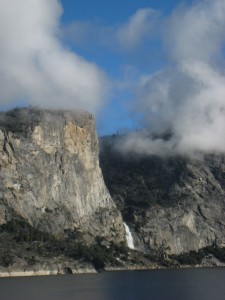 View of a waterfall from Hetchy Hetchy Dam 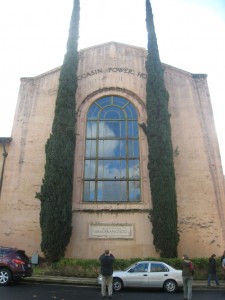 After leaving Hetch Hetchy, we traveled to Moccasin, the location of the hydroelectric dam. The director of the Hetch Hetchy reservoir took us on a tour of the new and old hydroelectric dam. Moccasin is a small company town where water from the Hetch Hetchy reservoir is used to create hydroelectric power. The water from Hetch Hetchy is so clean that it doesn’t need treatment. So, if the creek that runs through Moccasin floods into the Moccasin reservoir the water is considered contaminated and the reservoir will then be drained as a bypass pipe continues to send water to the San Francisco Bay Area. Seeing the size of the pipes and turbines was amazing because it made you think about the pressure needed to send enough water, downstream without pumps to San Francisco.

After Moccasin, we took off back to the San Francisco area and along the way saw some great scenery, geologic structures that we hypothesize are old marine deposits and a wind farm during the sunset. 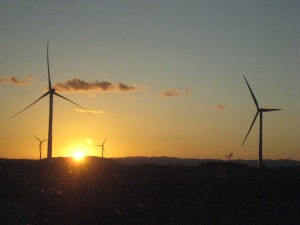 Windfarm with the sunset in the background

Posted by Joanna Freeman on November 9, 2010
Comments Off on Hello California!