Located along the mid-Susquehanna River, Bucknell University sees only half of what passes through the watershed into the Chesapeake Bay. Last week, the Bucknell on the Susquehanna program took a journey to the lower reaches of the watershed to explore contrasts and similarities to our own portion of the basin.

After a bit of a close call with a tree , BotS arrived at the Lancaster County Courthouse to meet with members of the county planning commission, and to hear about the challenges and successes of Pennsylvania’s most comprehensive county development plan. With barely 10 percent of the county listed as either agricultural or rural, the local government must balance the demands of a growing population and a rich rural heritage. Planning in the Lancaster area requires a nearly infinite supply of patience, with many plans taking years if not decades to be fully realized.

Nonetheless, they graciously shared part of their day to explain the complexities of their work, which follows much of the focus as the Susquehanna Greenway Project we visited a few weeks ago in Williamsport. Their task is compounded by the challenge of managing commercial development and urban densities on top of conservation and environmental initiatives. Projects they undertake include enhancing rail service to urban centers like Philadelphia (along one of few profit earning Amtrak lines) and promoting greener transportation instead of the post-WWII obsession with the automobile. To learn more about their work, visit their website. If you go to visit them at the Lancaster County Courthouse, just remember to leave your pocketknife, steel-toed field boots, and other excessively metallic items in the car, it will make things much easier at security. 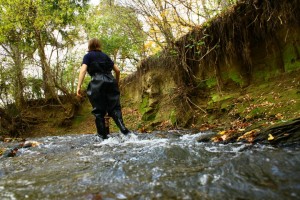 Steep banks, highly incised by this stream, are highly unstable, and not only do they contaminate the water with nutrients and sediment, but they are threat to landowners who watch their land wash away with every rain.

For as many restrictions and accusations as have been leveled at farmers and the agricultural industry, new research has brought to light a previously overlooked culprit in the matter of nutrification and sedimentation in the Chesapeake Bay. Water power has been used through the ages for a multitude of purposes, including gristmills, sawmills, blacksmithing, textiles, and many other applications. However, despite the seeming environmentally friendliness of this “green” power, the disturbance mill dams cause in natural stream systems, coupled with soil loss from deforestation and old agricultural practices, the legacy of mill dams in the watershed are causing significant problems for both the river and the bay. Dams were constructed on nearly every available stream, storing and diverting water to slowly turning wheels up and down the East Coast that powered the young United States of America. The dams themselves impeded the passage of migratory fish, but when they are removed, the sediments that have accumulated over the decades begin to wash downstream at rapidly accelerated rates.

After lunch we met Dr. Dorothy Merritts of Franklin and Marshall, and after a brief introduction to the issue of mill pond legacy sediments, BotS headed out to a site on the Little Conestoga Creek to view the impacts of a particularly high mill dam that breached around the 1920s. The stream at the site has cut deep into the layers of fine sediment, leaving 20-foot high banks (the previous height of the dam) that beautifully record well over a century of sediment deposition. This is a problem, because the historic accumulation of nutrients and sediments are now eroding into the rivers at staggering rates.

Behind this one site alone, Dr. Merritts estimated that approximately 70,000 tons of sediment remain waiting to wash out to sea, like a time-capsule of agricultural impact being released all at once. The BotS crew stirred up more than our fair share of sediment just in our exploration of the deeply incised banks,but this means very little overall, compared to heavy rainfalls and human activity such farming. At the bottom of the historic sediments, dark soils from the wetlands that previously occupied the valley floors have been compressed into mats of organic matter that contain seeds and nuts from centuries prior to human disturbance, some of which remain viable enough to be germinated in a laboratory. 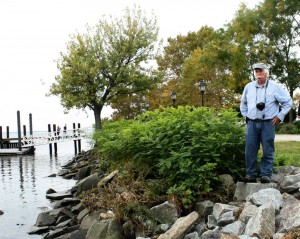 Rip-rap at the end of the river, same as at the headwaters, shows man's attempt to control the river from start to finish.

This simple song has recently become a favorite of mine, and very succinctly points out a few very significant points. Rivers are constantly growing, with every tiny stream contributing their share into the flow that will end in the sea. This also speaks to the need for care for our resources, such as our rivers, in the same that children should care for and be respectful of their mother who provides for them. Perhaps it doesn’t rhyme quite so well, but our first stop of the morning was where the river flows into the Chesapeake Bay at Havre De Grace, Md., 444 miles downstream of Cooperstown, N.Y. Sadly,  like at the headwaters, the shoreline is armored with rip-rap, much to Professor Kochel’s dismay (see photo).

In the distance, we can hear the booming of an explosives testing range, which I would expect in the desert of Nevada, but not so much in the Chesapeake Bay. Here at the Susquehanna Flats, the river spreads out in a huge delta, and though we could stay here and study for ages, we quickly move on to our next site. At least there is positive news in this end of the Bay. Pennsylvania’s regulation and water quality controls seems to be having a positive impact on the local ecology, with the Upper Chesapeake receiving  higher marks than it has seen in years.

I used to be confused by the river gauge readings for the Lower Susquehanna in the off chance I would check their data, but I never bothered to think though why they fluctuated so consistently. Not one, but four major hydro-electric dams span the lower stretches of the Susquehanna River. We were granted the opportunity to tour the largest of them, the Conowingo Dam in Maryland. Due to security reasons, I will not be posting any photos of the tour, and my camera unfortunately lacks the zoom to capture decent pictures of the eagles that gather in flocks to feast on stunned fish coming out of the turbines. However, we were allowed the opportunity to tour deep inside the dam, to see the fish lift that moves migratory fish over the first of the four hurdles in the river, and see that control room that could restart the Eastern Power Grid in the event of a blackout.

Early in the semester, while visiting the Smithsonian Environmental Research Center (SERC), our guide told us that the amount of nutrification and sediment that contaminates the Bay is largely dependent on a man upstream on the Susquehanna with a big lever. In the control room of the hydroelectric plant, we saw precisely the controls that he was speaking of. Though hydroelectric power is one of the cleaner forms of power, and  while it does have many environmental positives, the benefit of the power versus the ecological disruption caused by even this from of power is questionable at best. If tiny streams being damed eventually cause such a negative impact when they are removed, what must the impact be of four major dams spanning the entire channel of the mighty Susquehanna? 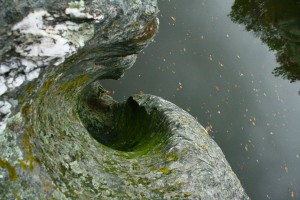 One of the many potholes in the Holtwood Gorge, scoured out by tornadoes of debris during floods caused by the melting glaciers upstream.

Between the Conwingo and Holtwood Dams, the Susquehanna River presents a side of itself that I never could have imagined. The main channel of the river is deep. By deep I don’t just mean 20-30 feet, I mean a main channel more than 150 feet deep. The river was carved millenia ago during glacial paleo-floods which scoured the rocks down to great depth, leaving behind deep channels and potholes visible to this day. Cut into the schist of the bedrock channels, Professor Kochel showed us numerous examples of the potholes which are believed to be cut out by vortexes of rock and other debris during periods of immense discharge. The floods of the past would have dwarfed anything we see today, including the 1972 Agnes flood, when over 1.3 million cubic feet per second passed over the Conowingo Dam. By comparison, the highest watermarks from Agnes would still be 15-20 feet below the floods from glacial times. Also at that time, the sea level was much lower, which is what explains the fact that the Lower Susquehanna Gorge has holes scoured by catastrophic flood which are deeper than present day sea-level.

Returning home, Wednesday was spent discussing the nature writing of Bucknell Professor Chris Cumuto, with an eye toward our next exercise: writing about our favorite place. While I feel a little concerned about divulging the precise location of that site, I look forward to sharing with you my account of my favorite natural place. I will give one hint, however. On Nov. 6, Bucknell on the Susquehanna will be flying much closer to it for our two-week comparative watershed studies trip on the West Coast…

Posted by David Manthos on November 3, 2010
Comments Off on The Lower Susquehanna