This past week was focused around the lower Susquehanna Valley and included a trip to the Lancaster area where we were introduced to a variety of topics ranging from county planning to power sources, new and old.

Not so bright but very early Monday morning we were met at our dorm by the BotS Mobile to head off to Lancaster. We headed straight to the center of the city and met with the Lancaster County Planning Commission. We learned that because Pennsylvania is a commonwealth the duty of land planning is given to the local levels of government. This makes the commission’s job hard because they have been working lately on what they call “smart growth.” This is where they have been trying to create compact cities with higher population densities designed to decrease the dependence on cars by creating better bike paths and, at the same time, maximizing Lancaster’s fertile farm land.

In an era where everyone is trying to build as many skyscrapers and build cities bigger, I think what Lancaster is doing is great. They are trying to preserve their historic and famous agricultural lands while meeting the needs that come with a growing population. Lancaster’s context sensibility has been working well to preserve their spirit of place. 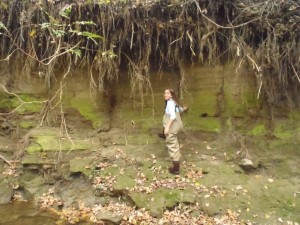 Layers of legacy sediment with Amber as a scale

Monday afternoon, we made our way over to Franklin and Marshall University to meet up with Dorothy Merritts, a ground-breaking researcher in the field of legacy sediments of milldams. Professor Merritts took us into the field to one of her sites where a milldam once stood and, now in its place, are piles of sediment that was a result of the heavy logging in Pennsylvania and the numerous milldams in Lancaster. It was a great time to stretch our legs, which was if we could move in our chest waders. I personally felt as if I were wearing my father’s shoes like I was a little girl playing dress up again because my waders were so large.

It was amazing to see the sediment tower over our heads and look at the base of the bank and see the darker, richer looking peat that was the bank back when the mills were built. Professor Merritts dug out a section of the old peat and when given time to look through it I found leaves and wood most likely from the 1800s that had been buried so rapidly it never had time to decompose. It was as if they were fossils preserved in time by the legacy sediments. 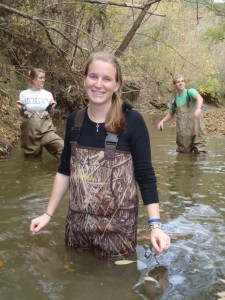 Tuesday, we woke to a grey, cold damp day but that didn’t ruin our morning walk around Havre de Grace, the mouth of the Susquehanna River and where the river meets the Chesapeake Bay. It was a great experience because it, in a way, tied our trip to the Chesapeake Bay in the beginning of the semester to the more recent themes we’ve been studying. There were a lot of beautiful sea gulls sitting on posts throughout the boardwalk at Havre de Grace with the small lighthouse looking over the mouth of the river, protecting anyone who would dare venture up the river.

Anyone who would venture up the river wouldn’t make it very far, like the migratory fish species, shad, because both human and fish would encounter the Conowingo Hydro-Electric Dam which spans the entire Susquehanna just below the Pennsylvania-Maryland border. We were fortunate enough to be allowed a tour through the facilities and I learned a lot although I was anxious the entire time knowing in this relatively narrow facility, millions of gallons of water and pressure were trying to pass through the facility on its way to the bay.

It was amazing to see the facility and the complicated mechanisms that essentially turn the energy of running water into electricity. It was also very interesting to see the fish ladder that Conowingo has to allow migratory species like the American shad to pass through the dam on their way to mating locations north of Harrisburg. Some fish, migrating south, however, aren’t able to take a ride on the fish ladder and, instead, pass through the turbines and come out the other side very stunned and perfect food for 100 bald eagles and herons. 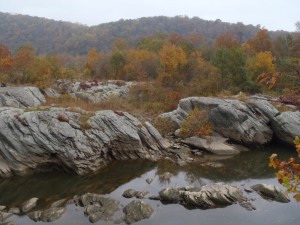 View of large bedrock shelves within the river channel

After lunch, Professor Kochel led us on a hike through to the river. We could see bedrock shelves sticking up out of the shallow river with pot holes in them where erratic rocks from up stream were caught in currents and burred holes into the bedrock sheets. It was a fantastic hike because the colors of the leaves were vivid and the weather warm.  After the hike, we took a driving tour back to Lewisburg making pit stops at the Susquehanna River Valley Gorge and a classmate’s house where we all got homemade cookies and the presence of a dog to cheer us up after a long but rewarding few days.

Wednesday was a change of pace for us. After a much-needed hour to sleep in we met as a class on campus to learn about creative writing and read some of Professor Chris Camuto’s works. From these works we will be able to write our own personal account of one of our favorite places which for a science major who writes only lab reports will be a nice break. 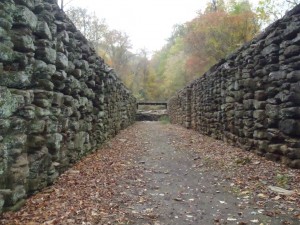 One Response to “The lower Susquehanna River Valley”