Last week, we focused on the river towns of the Susquehanna River. We focused on the small towns that surround the Lewisburg area and went on a tour led by Bucknell Professor Ben Marsh of Environmental Studies and Geography.

The tour was very interesting and I learned a lot about Pennsylvania’s traditional social structure. Our first stop, the Pennsdale Meeting House, was built just like the other small homes in the area and as Professor Marsh explained, it was because when the building was built in the 1700s, everyone had the same social core, a conservative ideal with a strong sense of community that stemmed back to their European heritage. What I found really interesting was that this sense of style continued into the early 1900s. To me it seems that people were afraid of breaking the mold and being the one who doesn’t conform.

On our way to our next stop, we drove by the Lycoming Mall, a site that was described as being built in a “placeless” area. By that I mean it was built in an area where there was nothing. The mall created the place and modes of transportation, like highways, were built around it. It reminds me of how a town is built: someone has to decide to build in an area and people follow to create a town.

Muncy, like Lewisburg, is a town built on the bank of the Susquehanna. Unlike Lewisburg, which is a pre-industrial town, Muncy along with other towns like Montgomery, were built for a specific industrial purpose. In the case of Muncy, it was its proximity to resources like wood and coal and the canals and railroads that passed through the town. Because economic vitality of timber and coal has decreased, Muncy has become a town shaped by the historical preservation of its historical legacy.

Milton, our last stop, was another river town that thrived because of its location on the river. Unlike Muncy, Milton has continued to survive because of the land use. The factories and large industrial goods market keep Milton alive economically and socially. However, it has changed the landscape to look very industrial. Remnants of old factories stand in ruins in the background to current factories, a haunting reminder of what Milton was. 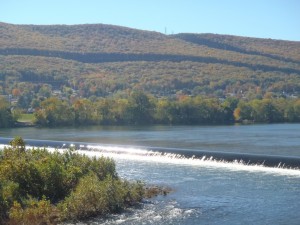 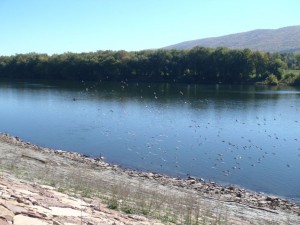 A flock of birds takes off from the Susquehanna Greenway

Posted by Joanna Freeman on October 21, 2010
Comments Off on Susquehanna river towns