Even as Pennsylvania recovers from the after-effects of the coal and logging booms, another natural resource has been discovered within the borders of the Commonwealth, the Marcellus Shale. Over the millennia, the 300 million-year-old shale has been compressed and cooked by the heat of the earth’s  core, producing natural gas trapped in the tight layers of the rock. To extract the methane from the rock, the gas industry has pioneered the use of two specific methods to extract the valuable resource from its present location approximately a mile beneath the surface of the Appalachian Plateau: horizontal drilling and hydraulic fracturing. 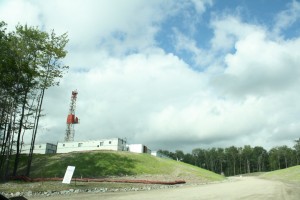 Deep in the Tioga State Forest a rig rises in the middle of a five-acre clear-cut lot. Photo taken east of Blossburg, Pa., this past summer in conjunction with the Susquehanna River Initiative Summer Writers Institute.

To make a very long and complex story short, drillers set up an approximately five-acre well pad (typically no larger than five acres because certain permits and regulations are not required on sites less than five acres) and drill down nearly a mile into the earth. They then turn the drill head horizontally and drill laterally through the middle of the Marcellus Shale for as much as a mile away from the pad. Usually half a dozen wells are drilled out from a single well pad, maximizing on the productivity of each site.

Around 5 million gallons of water are then mixed with sand and chemicals, which are blasted into the mile-long exposure of shale at high pressure, a method known as hydraulic fracturing, or “fracking”. The grains of sand prop open the cracks caused by the fracking process, allowing the gas to begin to flow out of the formation. The environmental outcry against these methods from citizens and environmental watchdogs mostly revolve around water use and water quality. 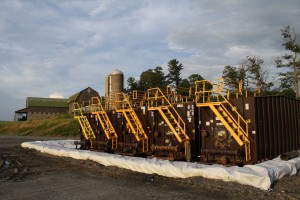 First, the amount of water being used by the industry is phenomenal, particularly considering the sources being used within the watershed. While 5,000,000 gallons means very little to a river the size of the Susquehanna, it can be a tremendous burden on the tiny tributaries being impounded and used as water supply points. Second, there are no pipelines being established to transport water for fracking, so every gallon of water has to be trucked to each site, along with tons of equipment, pipe, sand, and other materials. This creates a 24/7 din of traffic howling through small towns and along narrow winding roads that were never designed to handle so much activity. Once the water has arrived, the chemicals that are put in the water pre-fracking remain exempt from the Safe Drinking Water Act and, therefore, even the identity of what goes in the water has been zealously guarded by most as a trade secret.

Then, after the fracking procedure, the flowback water that comes out of the ground (between 20 and 50 percent of the original volume returns to the surface) has mingled with the brine in the shale formation, along with heavy metals and volatile organics such as strontium and benzene. This “frackwater” is between 5-10 times the salinity of seawater, is radioactive, and has been infused with unknown chemicals, but we have yet to produce a truly satisfactory plan to treat and/or dispose of it.

The first part of Week Six has been spent on campus in our to-date little used classroom, coming to grips with the vast experiences we have engaged in so far, learning about the physical and political issues of the Marcellus Shale, and finalizing the preparation for research projects to be conducted over the remainder of the semester. On Thursday, the BotS program joined with Professor Amanda Wooden’s ENST202/245 classes on a field trip to Dimock, a town suffering from well-water contamination blamed on Marcellus exploration and extraction. As Tropical Storm Nicole dumped several inches of rain on the Susquehanna watershed, we make our way northeast to the tiny crossroads of a town where residents claim natural gas drilling caused methane gas to migrate into their well water. The contamination allegedly caused wells to explode and has made the water unusable for residents who now rely on deliveries of both bottled drinking water and non-potable water for bathing, laundry, etc. Today, however, is landmark event in the case of the citizens of Dimock vs. Cabot Oil and Gas. 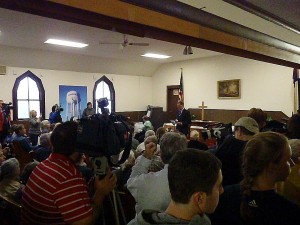 The packed Dimock Baptist Church during Secretary Hanger's announcement of the $12.8 million water pipeline project to be paid for by Cabot Oil and Gas.

The Dimock Baptist church is packed with more than 100 people by the time we arrive, far more than the pews can possibly hold. The occupants include rural residents in jeans and ball caps, cameramen busily attending to at least seven large news camera, journalists, representatives from Cabot attempting to stand inconspicuously in the back, and even filmmaker Josh Fox, director of a popular environmental documentary “Gasland,” but all the attention is on one man.

John Hanger, Secretary of the Pennsylvania Department of Environmental Protection (DEP), calmly read aloud the current findings of the DEP, charging Cabot with numerous violations and of negligence in dealing with the damage they have caused. Hanger then formally announced the DEP’s commitment to bring a municipal water line, at Cabot’s expense, to the citizens of Dimock. While it remains unclear whether Cabot will comply with the DEP’s mandate without going to court, this commitment by the DEP is a landmark precedent in addressing contamination from any drilling activity in the Marcellus Shale.

While Cabot maintains its innocence in the entire case, even claiming to have been forced to agree to certain DEP mandates “under duress” (a statement which drew contemptuous laughter from the assembled citizens), their claims are made even more dubious by their employment of armed guards to escort water deliveries and other industry activities in the Dimock area. While details remain unclear, this escalation seems to have been prompted by a recent encounter with an armed resident. To this, Sec. Hanger emotionally pleaded, “Everybody, put the guns away. Everybody has to do this through the law. Cabot has to follow the law. You have to follow the law”

Having worked on a research project over the summer regarding the policy and political repercussions of this most recent boom, being in Dimock for this landmark press conference was an incredible experience to witness. I also would like to add that the trip was arranged as a follow up to the summer research efforts of my colleagues Rob Duffy and Lexi Orr, who spent their summer working in Dimock.  While the outcome of this particular case, and of all the impacts of the Marcellus Shale Natural Gas boom remain to be seen, these developments will yet again reshape the face of William Penn’s woods.

Next: To the Headwaters of the Susquehanna

Posted by David Manthos on October 4, 2010
Comments Off on The next wave…