We Didn’t Start the Fire….

This week’s focus was on the socio-economic effects on the watershed. Coal mining and logging have been the historic socio-economic boom and busts of the area, and now Marcellus Shale is looking like it will be the next commodity to take the same course. This week has been full of field trips to Centralia, Pioneer Coal Mine and the Lumber Museum in Galeton, Pa. 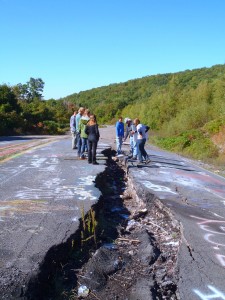 Part of the old highway through Centralia with steam still seeping out of the cracked road, caused by the underground coal fire.

This was my second trip to Centralia and the Pioneer Coal Mine, but it wasn’t any easier emotionally to walk through Centralia. Centralia has had a coal fire burning beneath the town since the 60s. Slowly the government forced the locals out of their homes, if health problems from darbon monoxide didn’t do so already. As groups of people moved out, their homes were torn down, leaving only a handful of homes left today. We watched the movie, “The Town that Was,” where one of the few residents left in Centralia still mows the main part of town and puts up Christmas decorations on the few street lamps that are left. He no longer works in town but commutes to Harrisburg.

This provoked a discussion over what home means to you and what you would do for your hometown. I personally don’t feel like I have a hometown I’m attached to because I moved around at critical times in my life. Yes, I’ve spent a majority of my life in New York, but I don’t have a strong emotional tie to the town anymore, unlike my one brother who cried when we moved from N.Y. or my oldest brother who always called the D.C. area home.

For me home is where the heart is, and for me that means where my friends and family are. It’s hard to think that there are families who were forced to leave their homes because of the health problems associated with carbon monoxide and prevalence of sinkholes from the burning below their homes. I feel people are attached to the area still because of their strong history with the landscape and coal mines that generations before them worked in and learned to trust each other in the pitch black of the mine, 400 feet below ground. 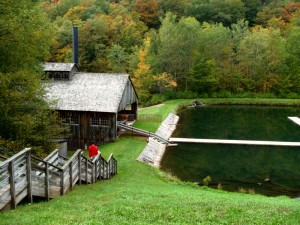 Our trip to Galeton, Pa., later in the week was an adventure. Galeton is a small town in the plateau of northern Pennsylvania and was beautiful with the changing colors of the trees. Galeton was part of the logging history in Pennsylvania and, 100 years ago, it was completely rid of all trees. The logging museum allowed us to see what the logging camps looked like and how the Civilian Conservation Corps lived. At the end of the tour there is a sustainable forest that we could walk through and see what the area looked like and see some effects of the deforestation. It was a beautiful day for the walk but the drive home wasn’t so pretty. We hit a storm complete with hail and thunder right as we were driving to the Hyner View overlook, approximately 2,000 feet above sea level. Luckily the storm passed right as we got to the overlook and we had a beautiful view of the West Branch of the Susquehanna and fog rolling off the mountains. 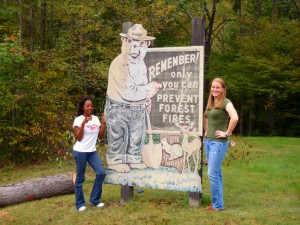 Morgan and I remind you that only you can prevent forest fires! 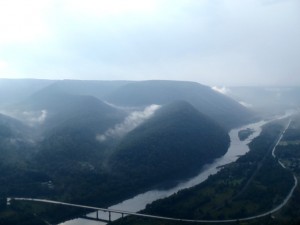 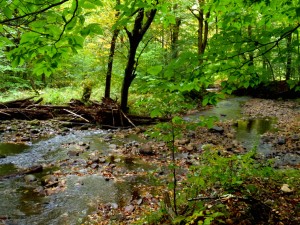 Cobbles in a tributary to Lycoming Creek

Posted by Joanna Freeman on September 27, 2010
Comments Off on We Didn’t Start the Fire….