After a week on the road, it almost feels like a vacation to stay around Lewisburg for our activities. We nonetheless remained quite busy, visiting Cowan several times, electro-shocking a portion of a small creek to collect samples of aquatic lifeforms, and visiting local farms that ultimately affect the Chesapeake Bay that we just visited the week before. 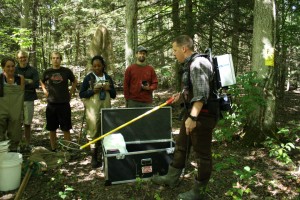 Fish-busters! (Que joke about crossing the streams...) Dr. McTammany fires up the electroshocker to sample a small, cold-water tributary to Buffalo Creek.

The beginning of the week involved understanding watershed science, from both a geomorphological and an ecological perspective. We measured stream discharge, surveyed a cross-section of Buffalo Creek, and I was amazed at the number of small fish that turned up in a stream that seems to be occupied by little more than a few water bugs. To balance our inspection of the lifeforms in the tributaries, we also waded out into the middle of the Susquehanna to try to stir up a good representation of what lives there. While the river is always wide and shallow, the absence of of significant rain in the past weeks is extremely visible as we stand in the middle of the deepest channel with the water barely coming above the stomach.

Sometimes, though, it is hard to get an idea of how rivers work because of their size, and the fact that it usually takes a flood and/or great lengths of time to shape the landforms. So naturally, scientists have resorted to a tool that allows you to model entire stream and river systems. The Bucknell Geology Dept. tilting and re-circulating, sediment flume provides a safe and controllable environment to re-create all the factors that shape rivers, from variable flow that can flood the flume with around 3,800 gallons per minute to tectonic uplift simulated by jacks that can change the angle of the flume by up to four percent. 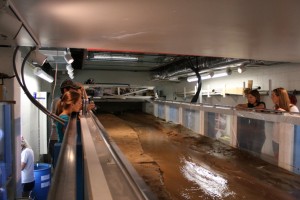 40 feet long, filled with tons of sediment, and with a laser mapping unit that runs on rails along the entire length of the device, this is the most amazing sandbox you will ever see. See! You CAN be a scientist and still get to play in the dirt...

It also happens to be a really cool sand  box that several of us got in on Wednesday, for the purpose of creating a straight channel in the wet sand. However, the simple force of running water overpowered our efforts in less than an hour and the channel began to follow its natural pattern again. Rivers meander back and forth across the landscape naturally, and this is one of many things that can be learned from the flume: Even if we would like the river to go straight down the channel we set aside for it, you can count on rivers eventually having their way in the end.

The end of the week brought us back to the Roaring Creek Field Station. We spent the first part of the morning doing what watershed scientists spend a great deal of their time doing: retrieving data.  From several gauges placed around the watershed, our professors hold their breath to see if their equipment has done what it was intended to do over the summer. Thankfully, all of the stations have faithfully recorded their data, not suffering from battery failures or from any other technological crisis that seems to occur when you depend on modern electronics. 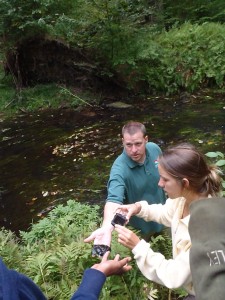 Don't always take what Dad offers you. Mats of cyano-bacteria like this gooey handful can be used to gauge the health of a stream and its ecology.

After lunch, the district forester spoke to our group at length concerning the challenges of managing public lands, particularly these forests. One particular issue caught me by surprise, though. I do not think of Pennsylvania, or anywhere on the East Coast for that matter, as being prone to forest fires. Apparently, it is not just the desert Southwest with its Santa Ann winds that suffer the scourge of fire, but even locally, too. Mostly caused by humans, either burning trash (a hobby my experience in Pennsylvania has shown to be enjoyed with great enthusiasm) or arson light the fires, and the Forestry Service and the Dept. of Conservation of Natural Resources use everything from trucks to a helicopter to spot and put out the blazes.

Up ahead: Burning trash lights off a different fire that has yet to be extinguished decades later…

Posted by David Manthos on September 22, 2010
Comments Off on Measuring the Watershed