It’s amazing what you can learn when you take a step back and look at smaller sections compared to the whole. In this case, the whole is the Susquehanna River and the smaller sections are the tributaries and streams that feed into the river. This week’s trips to Cowan and Buffalo Creek opened my eyes to the effect of storms on the habitat of the river.

Monday’s trip was focused on water discharge through Buffalo Creek and the change that occurs during storm flow. Through the use of surveying tools, we measured how high the water would come up the bank of the creek and how much water would be flowing through the section of creek measured. It’s amazing to think but during one of the last ice ages, large sheets of ice dammed off the tributaries of the Susquehanna River and caused large lakes and ponds to form. These lakes left a very rocky terrain behind that has little use to it because the rocks can be the size of a fist. Before this program, I would have never connected the glaciers to the land that sits as meadows or trailer parks. 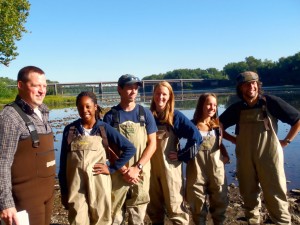 The group brave enough to wear chest waders to collect insects and stand in the water while electrofishing.

Tuesday was spent connecting the creek with the Susquehanna River on an ecological level. After wading through the very shallow river in Lewisburg and collecting bugs we made our way back to the creek where we did the same thing on Stony Run, named I assume for the rocky terrain from the glaciers. It’s amazing how different aquatic insects are between a few miles stretching from Buffalo Creek to the Susquehanna.

The best part of the day was when we went electrofishing. Sorry mom and dad, but, yes, we stood in the tributary as Professor McTammany shocked the water. This electrofishing was very different than the electrofishing I did in West Virginia this summer. The fish were smaller so therefore the voltage was smaller, but the fish didn’t jump as obviously as they did with the bigger voltage. Still, it was a lot of fun to see in a 10 by 4 foot stretch of the tributary how many fish we saw. We learned the reason for the difference in aquatic animals was the temperature of the water; water tends to be colder in the headwaters because the smaller streams are shaded by tree canopies and are usually fed by cold groundwater. Water downstream is warmed by the sun and, therefore, has less oxygen in it. Like different animals have different needs to survive and oxygen and temperature have the largest effect because they influence the availability of different plants and habitats for animals. 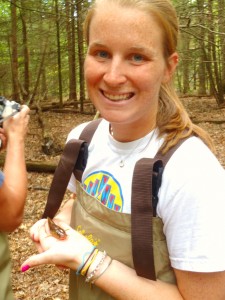 As a connection back to last weeks trip to the Chesapeake Bay and the problem of excess nutrients in the bay we went to two farms Tuesday afternoon that carefully try to minimize their nutrient loss to the streams that eventually reach the bay. They both use no till processes which keeps the soil compacted and nutrients in the soil, usually with a cover crop in the winter to prevent wind from carrying the soil away and to add more nutrients into the soil.

Wednesday, I like to say was a day for play. We spent the morning in the Geology Department’s Flume Room, and some of the day in the flume as well. The flume models rivers during different levels of water flow and geologic effects, such as uplift of the tectonic plates. We got to see the effect of stream movement with different flows and how the movement occurs when streams are different shapes to begin with.

Thursday was spent in the field again at what is now nicknamed as our second home, the Roaring Creek Field Station. We went around to different sections of the watershed and monitored stream depth and noticed that as we got further down the watershed there was more water in the creeks. After lunch we had a talk with the director of DCNR for the state forest Roaring Creek is in. He talked about how DCNR works to keep the forest as productive as possible so that it keeps the water in the watershed healthy and clean.

Posted by Joanna Freeman on September 20, 2010
Comments Off on Watershed management