Day 3: Safely returned to the mainland, our trip to the barrier island has been a success and we are all tired but thrilled to have had such an adventure. Next, our attention is turned inland to the Bay, and to one of the best places to come to grips with the issues and concerns that face the Bay: The Chesapeake Bay Foundation (CBF) Headquarters.

It is one thing for an organization to say, “Save the Bay,” and another thing to 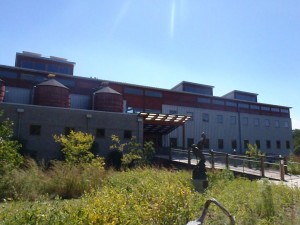 The Chesapeake Bay Foundation Headquarters, a "green" building constructed on the shore of the Bay itself.

exemplify it by lifestyle and even the construction of their facilities. The Philip Merrill Environmental Center is constructed from the ground up to be both an environmentally sustainable  center of operations and a functional classroom that represents the ideals of the foundation. Even from the outside, the center is obviously not your typical office building, from the green roof to the rain water collection tanks salvaged from an old pickle factory. Inside it’s even more exciting with wide open, well lit office space, expansive views of the bay, and a unique kind of lumber that I will almost certainly use when I construct my own earth-shelter house. Vertical Strand Lumber (VSL) takes strips of wood left over from veneer processing and other scraps, and by applying resin to them, manufacturers can create beams of any specification. Not only making use of what would otherwise be a waste product, but also producing lumber to specifications that would require lumber from old and magnificent trees.

After touring the center, including its composting toilets, we set out to experience some of the educational experiences the foundation offers to draw attention to issues of relevance to the restoration and preservation of the bay. We begin in canoes heading up Black Walnut Creek, with osprey swooping overhead and an up-close look at a brackish marsh to compare with the salt-marsh we saw just the 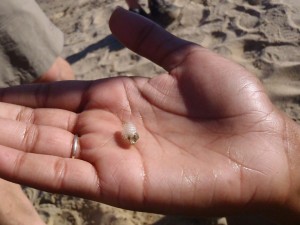 A fish-gill isopod, AKA the "alien egg sack".

day before. Returning to shore, our guides break out seine nets for us to take a sample of the biodiversity that can be found in the shallows of the bay. Incidentally, we discover what we deem an “alien egg sack” which turns out to be a fish gill isopod, a parasite as nasty as what we first called it.

The night ends on the shore of the Chesapeake bay, after building a bonfire on the beach and gazing at galaxies, we settled into tent to spend the night on the sand. A fitting end to a day of exploring more about the Chesapeake Bay.

Day 4: My personal favorite experience with the Chesapeake Bay trip is our next day spent on the MV Snow Goose, an educational vessel owned by the CBF for the purpose of educating students of all ages about the Bay in a very hands-on manner. Moving up to within sight of the Inner Harbor, a plot of land on shore remains conspicuous by its absence of development in an otherwise heavily urbanized environment. This site is in fact a graveyard of toxins, primarily chromium, that are a reminder of the Bay’s hard used history. Floating in the channel, everyone takes on some responsibility recording data about the water conditions and quality  in this portion of the water. Our trip has caught the river in a unique phase that caught me off-guard while recording the temperature data down to the bottom of the channel. Being the end of summer and moving into autumn, the water temperature increased with the depth because the deeper water is retaining heat from the warmer months. We were lucky to catch the approximately week-long window  of this temperature shift. 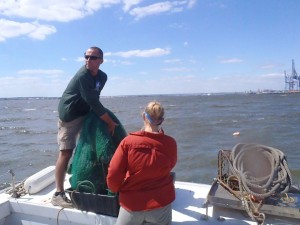 Drawing in the net on the MV Snow Goose to see a sample of the biodiversity is in deeper waters. It brought up crabs, multiple species of fish, and more jellyfish than we knew what to do with.

Further south in the bay, we dredged for oysters and ran a gill net to take samples of bio-diversity in deeper water than the previous night’s shoreline seine netting. The species diversity we brought up were reportedly better than they have  been in the past, but by no means what the bay historically is capable of. The most disturbing sample brought up from the bottom of the bay, however, was the sediment sample from the bottom of the bay. When the sampler returned to the surface, it was devoid of life, and had the pungent smell of petrochemicals. Our captain attempted to light it on fire, but despite the failure to ignite, the image of that sludge on the floor of the bay is burned in my mind.

Day Five: The morning consists of several lectures and touring the experiments 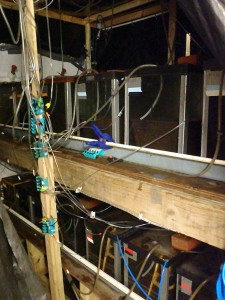 and facilities of the Smithsonian Environmental Research Center (SERC). The scientists at SERC are extremely dedicated and passionate about their work, which ranges from oyster contamination studies to tree canopy carbon dioxide studies. After a very detailed and thorough explanation of their work and after helping to assemble a prototype chamber for measuring gas exchange in marsh grasses at the Global Change Research Wetland, we finally board the bus to return to Lewisburg.