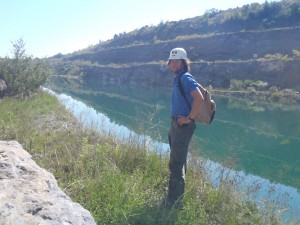 The old quarry southwest of Bucknell, between the Keyser and Tonoloway limestone formations, where we found proto-shrimp fossils and evidence of tectonic uplift.

Week Two of Bucknell on the Susquehanna has been largely focused on two elements: Rocks and humans. While we are no longer a Stone Age society, dependent on stone to make our tools, we are still tremendously influenced by the rocks that make up the world we live in. From quarries to sacred Native American grounds, and from outcrops of the now famous (or infamous, depending on your perspective) Marcellus Shale to obscure piles of dirt that turn out to be 800,000 years old glacial deposits, we have been all over the history of the Susquehanna River Valley.

Rocks are deceivingly benign, containing extraordinary history in a medium that can be easily ignored because they are always all around us. However, at an old limestone quarry on Monday, I had the opportunity to page through a history book that hasn’t been opened in over 400 million years. The thinly bedded Tonloway Limestone easily flakes apart in your hands, and with each piece flayed apart, I am seeing a geologic record that has not seen the light of day in eons.

There is not just looking fossils to be found in individual formations of rocks, there is much more to be learned about the way that these different types of rocks have different effects on us at the surface. The hardened quartzite Tuscarora Sandstone forms what is left of the ridges of the Appalachian mountains, while the limestone outcrops provide outstanding fertility to the soil. But there is one rock here that I did not expect to find: The Marcellus Shale. 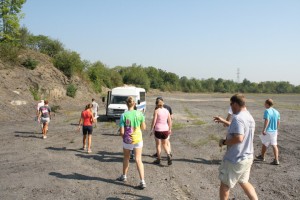 So Marcellus, we meet at last! Our "Magic Schoolbus" at an outcropping of the Marcellus Shale.

Having worked most of the summer on a research project concerning the Marcellus Shale Natural Gas boom, it’s almost like finding a long-lost acquaintance, or confronting a nemesis. Where I studied the impacts of drilling for gas in this formation, the Marcellus was 5,000-8,000 feet beneath the surface, but here in the folded topography of the mountains, the Marcellus finally shows itself. But in this part of the world, it is not a rich mineral resource that will make landowners wealthy. It is a very poor soil for farming, primarily because of its impermeability to water. Thus the same rock has two vastly different impacts on the people when found in different circumstances.

In more recent history, we visit the bluffs overlooking the confluence of the Susquehanna River, a sacred Native American meeting place of sky, water, and earth, set atop the solidified remains of ancient river channels. The river below us was symbolic to the natives of an even more important river, one that ran beneath the Susquehanna and connected this world to its mother Earth. 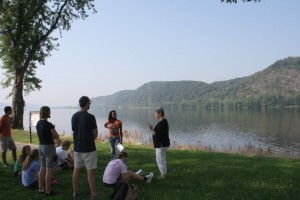 With Professor Katie Faull on Shamokin Island (now Packer Island) discussing Native American history at the confluence of the north and west branches of the Susquehanna River.

Ironically, most of our literature, and even this website, describes the river as “the largest non-navigable river in North America.” But as Professor Katie Faull reasonably objects, “non-navigable to whom!?” As short a time ago as last week our group took kayaks along an eight-mile stretch of the river, without the slightest problem. To the people that inhabited this land before us, the river was so navigable that it brought nations and goods together from miles around. Goods have been found showing evidence of travel from the Great Lakes to Florida, and beyond, proving a fact that few people seem to really grasp. Native American populations, much like us, were not static. They moved around the region considerably, using both the river and trails that have since become enlarged to make many of our present day roadways.

Next week, we make a journey that many of these tribes probably made, down to the Chesapeake Bay. While my prayers are certainly for the lives and property in danger on the coast from Hurricane Earl, I am definitely hoping that he whips up some exciting aftermath for us to explore as we look at coastal geomorphology!

Posted by David Manthos on September 7, 2010
Comments Off on Ancient History