Coming to Bucknell 2 years ago, I never imagined I would immerse myself into the culture of Lewisburg and nearby towns. I thought college was about classes and getting a degree on time, but in this past week I’ve managed to attend classes and break my Bucknell bubble at the same time. Oddly enough, I found the connection between the geology of the river valley and the local land use fascinating.

In my basic geology class over a year ago I learned about different rock formations, how old they are and how they formed but I never connected it to anything other than information I needed to know for a test. This week was a refresher on what I originally learned and also a hands-on application. Monday we drove around in the BotS Mobile looking at different bedrock formations. At Winfield Quarry, just 20 minutes South on 15 from Bucknell, we were able to see fossils of ancient shrimp-like marine creatures and almost perfect cross-sections of bedrock that showed us how the geologic plate that Pennsylvania sits on has moved from an equatorial latitude to glacial, marine to continental, all culminating where it is now. We spent a majority of Thursday in the field applying the rock types to their most productive land use. For example, before this week limestone was just a stone that could be identified from the formation of bubbles when it came in contact with acid. Now I know limestone is perfect for farming in the valleys of the upper river terraces. It’s amazing what you can learn when you just leave the bubble. 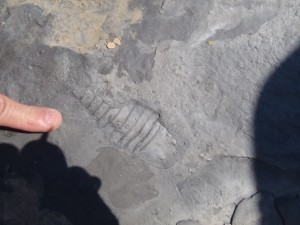 Tuesday gave us a break on geology and an insight into the history of the Native Americans in the area. Little did I know that Freshman year I rowed on a sacred area of the river for the Iroquois Indians. The Natives knew the river valley better than most people will ever know. The Natives managed to use what we call the ‘Largest Non-Navigable River’ to travel from Onegonda to Northumberland. Did you know that most highways and interstates around Bucknell, like Rt 147 and 11, were Native American trading and warriors routes?

View of the Confluence of the North and West Branches

On another note, we leave early Monday morning for the Barrier islands of the Chesapeake Bay, so let’s hope Hurricane Earl doesn’t do too much damage.

Posted by Joanna Freeman on September 3, 2010
Comments Off on Breaking the Bubble